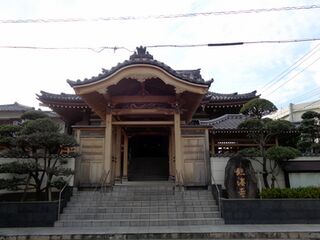 The main facade of Rinkai-ji as it appears today

Rinkai-ji is a Shingon temple originally located in Naha Bay. More specifically, it was located about halfway down a long spit of land, which extended out into the bay and which had the Mie gusuku fortress built at its end.

A branch temple of Okinawa's Gokoku-ji, the name "Rinkaiji" literally means "temple beside the sea," an appropriate name given its location; that location also earned it a number of common alternate names, all incorporating the character 『沖』 (oki), meaning, roughly, "in the open sea." The quays nearby were known as Oki-no-soba.

It is unclear when Rinkai-ji was first built, though references to it date back at least as far as 1609, the location "Rinkai," and the existence of a temple there, being mentioned in Kyan nikki. However, a temple bell dating to 1459 is also associated with the site, indicating the possibility that Rinkai-ji dated back that far as well. The bell, known as the Ippon-gongen bell , is said to have been cast and hung at Rinkai-ji by magistrate Yonafuku and builder Hanagusuku. Lost in 1945, the severely damaged bell was rediscovered in 1954, and is now held at the Okinawa Prefectural Museum.[1]

The temple is featured in "The Sound of the Lake at Rinkai" (臨海湖声, Rinkai kosei), one of Hokusai's Ryûkyû Hakkei, or "Eight Views of Ryûkyû," a series of landscape prints published in 1832.

In 1908, due to construction in the port, the temple was moved to the Naha neighborhood of Sumiyoshi-chô, where it came to incorporate a number of Shinto shrines, including a Kumano gongen shrine, and a Hachiman shrine; as a result of its newfound association with Shinto, the temple was renamed Oki-gû, or Oki Shrine.