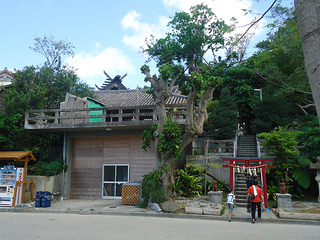 One of several approaches to Oki-gû 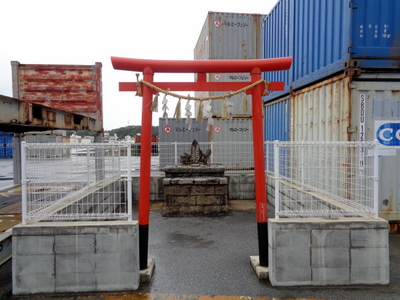 Oki Shrine is a Shinto shrine in Naha, and is counted among the Eight Shrines of Ryûkyû.

Though originally located within the grounds of the Buddhist temple Rinkai-ji, on a spit of land sticking out into Naha Harbor, the shrine was moved in 1908 onto the grounds of Asato Hachimangû in order to develop the harbor. It was designated a National Treasure in 1935, but was destroyed in the 1945 Battle of Okinawa. The shrine was then re-established in 1961, and moved to its current location in Onoyama Park in 1975.

The shrine is dedicated to Kumano Gongen, and was a prominent site for prayers for safe journeys. It is mentioned in the classical song Nubui kuduchi, a travel song about the journey to Kagoshima.

Constructed on a hillside, the shrine combines typical Japanese Shintô architectural elements, such as the torii gates and criss-crossing roofbeams, with traditional Okinawan elements, including red earthenware roof tiles. Upper sections of the grounds also include several small utaki (sacred spaces of the native Ryukyuan religion), and a monument or shrine erected in 2003 and dedicated to Okinawa as an "island of world peace."