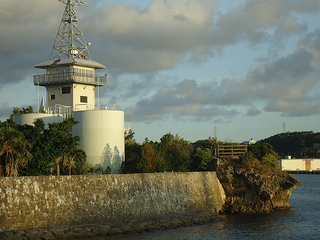 Mie gusuku, as it appears today

Mie gusuku was a small defensive fortress in Naha, the main commercial harbor of the Ryûkyû Kingdom. It and Yarazamori gusuku were each located at the ends of earthen embankments sticking out into the harbor, and functioned chiefly to defend the harbor from pirates. Both were constructed during the reign of King Shô Sei using labor not only from Okinawa Island but from elsewhere in the kingdom as well.[1]

In the late 16th century through the beginning of the 17th, a large chain was at times extended across the harbor, between the two fortresses, to block pirates or other ships from entering the harbor.

Mie gusuku was also a popular site for seeing off Ryukyuan ships departing the harbor. It survived relatively intact well into the pre-war period, but suffered severe damage, as did much of the island, in 1944-1945.[2]

Though little remains of the fortress itself today, the rock outcropping on which it stood remains clearly visible and intact. A small worship site stands on the site today, along with a modern Japan Coast Guard watchtower.