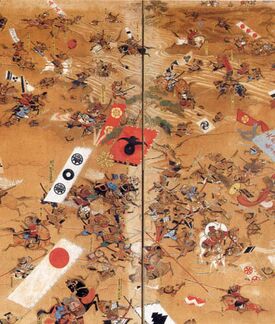 This battle, fought in the shallow waters of the Ane River, came about after Oda Nobunaga and Tokugawa Ieyasu threatened Odani castle, the home of Asai Nagamasa. Earlier that same year, Nobunaga, the master of Kyoto since 1568, had felt compelled to march against Asakura Yoshikage of Echizen province. The Asai, long-time allies of the Asakura, broke their alliance with the Oda and threatened the Oda army from the rear. A skillful retreat minimized the immediate danger brought about by this surprise development and soon Nobunaga was ready to punish Nagamasa for his treachery. The Oda and their Tokugawa allies marched on Odani castle, prompting Nagamasa to send for help from Echizen. Asakura Yoshikage sent an army to support him and the combined force marched out to confront Nobunaga in the field. Nobunaga reacted by placing a screen around an Asai fort he had been reducing (Yokoyama) and advancing to the southern bank of the Anegawa. The following morning the battle began, with the Oda and Asai clashing on the right while Tokugawa and Asakura grappled to the left. To the right Nagamasa's men fought very well and the situation there was soon in doubt for the Oda. Meanwhile, the Tokugawa men were handling the Asakura roughly and once he felt in a position to do so, Ieyasu sent his men against the flank of the Asai forces. The hard-fighting Asai had no choice but to rereat and the day ended in Nobunaga's favor. Some 1,000 Asai and Asakura men had been killed, as well as a number of commanders (some documents state as many as 9,000 were killed). At the same time, Odani was for the time being saved, as Nobunaga withdrew his weary army from the area soon afterwards. A few months later the Asai and Asakura retaliated by defeating an Oda army near Otsu, an action that saw the deaths of Mori Yoshinari and Oda Nobuharu (one of Nobunaga's younger brothers).