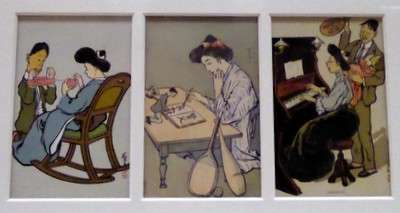 Kitazawa Rakuten was a Nihonga painter and manga artist, who is often identified as the first professional manga artist in Japan, and is credited with coining the modern meaning or usage of the term "manga."

He is said to have employed the term "manga" not so much in order to harken back to the early 19th century use of the term (see Hokusai manga), but, rather, to distance his own work from that of ponchi-e ("Punch pictures"), the sort of political cartoons and caricatures popularized by the heavily Western-influenced magazine/newspaper Japan Punch, published in Yokohama beginning in 1867.

Kitazawa's early cartoons appeared in a newspaper called Jiji shinpô ("Current Affairs News"), founded by Fukuzawa Yukichi and published from 1882 until 1936. Kitazawa took over the cartooning reins for Jiji shinpô when the previous cartoonist, Fukuzawa's nephew Imaizumi Ippyô, fell ill, in the late 1890s. Kitazawa was then granted his own section, Jiji manga, in 1902. Interestingly, despite being identified as the pioneer of modern manga, Kitazawa's "manga" were set apart from other sorts of political cartoons or caricatures not by including more text, or narrative, but actually by minimizing the text and emphasizing the images. This "modern" form of "manga" is said to have been influenced, in part, by the importation of Western concepts of "literature" and "[fine] art" as separate and distinct spheres.

Taking his own cues not from the London-based Punch, but rather from the New York-based magazine Puck, Kitazawa launched the magazine Tokyo Puck in 1905 and remained its chief editor until 1912 (the magazine continued to be published until 1941). Jiji manga grew into a full-color Sunday supplement in the 1920s, and it was at that time that the term "manga" came into more widespread usage.