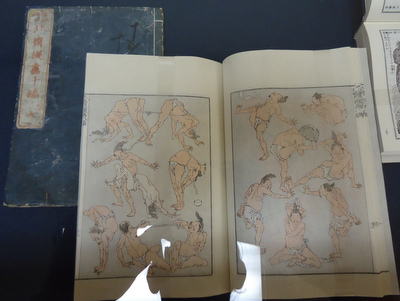 Volumes of Hokusai manga, showing an example of the contents

Hokusai manga is a 15-volume series of books of illustrations by the ukiyo-e master Hokusai. Often mistakenly cited as an important precursor to modern manga (comicbooks), the work consists almost entirely of mere illustrations, with only minimal captions or narrative structure, and no dialogue, let alone modern comicbook conventions such as word balloons and division of the page into panels. The illustrations range widely, from collections of spear-wielding men in different poses, to diagrams of torii, sketches of birds, landscape scenes, and fuller compositions resembling single-sheet woodblock prints. The work is surely the most prominent pre-20th century example of the use of the phrase "manga"; however, Hokusai employed the term for its literal meaning, roughly translated as "pictures running wild," or "overflowing/spreading pictures," and with no intention of any meaning related to narrative, or to pioneering a new graphical narrative style, format, or genre.

The fifteen volumes of Hokusai manga combined include roughly 4,000 pages of illustration. The first ten volumes were published between 1814 and 1819. The next two came out more than ten years later, in 1832-1833, and 1834, respectively. The publication date for volumes 13 and 14 are unknown; the final volume was published posthumously in 1878, nearly 30 years after Hokusai's death, but, unlike volume 14, carrying his signature.

Scholars have variously described the work as possessing elements, or aspects, of a painter's guide to how to depict various subjects; a playful depiction of human society; and of simply "random sketches."

The project had its genesis when Hokusai traveled to Nagoya in 1812. This was one of his few journeys outside of Edo. There, he met the publisher Eirakuya Tôshirô, who convinced him to prepare a series of sketchbooks, which amateur artists might use as guides. The resulting Hokusai Manga, published in 1814, was originally intended as a standalone volume, but its popularity and commercial success led to it becoming a multi-volume series. The first volume attempted to be roughly encyclopedic, from gods to people to animals to landscapes to buildings to seascapes. Later volumes each focus on more individual themes. After these initial ten volumes, two more were produced before Hokusai's death; another three were added even after Hokusai's death, with the last (15th) volume being published in 1878.

In attempting to define, describe, or translate the term "manga" in Hokusai manga, many scholars, including Tsuji Nobuo, John Rosenfield, and the bilingual Dictionary of Japanese Art Terms, describe it as "random sketches," or otherwise emphasize the free self-indulgence aspect of Hokusai's act of creation, characterizing the work, to one extent or another, as being essentially collections of sketches of various different subjects which Hokusai felt like drawing at the time. Contrary to common misconception, however, Hokusai did not coin the term. Rather, it first appeared in the late 18th century as an abbreviation of manpitsu-ga, a pictorial version of the manpitsu genre of essay-like rambling, meandering, writings. The term also appears in China, though with somewhat different connotations or meanings. Earlier works employing the term in their titles include an 1814 collection of images of beautiful women, Manga hyakujo, and Kôrin manga, a catalog of works by painter Ogata Kôrin, compiled and published in 1817, on the 100th anniversary of his death.

In the Edo period, therefore, it becomes clear that the word "manga," rather than having any meaning having to do with narrative (storytelling), was a term for works containing a great number of images depicted in a variety of styles. One 20th century manga artist, Ishinomori Shôtarô, attempted to emphasize, or recapture, this meaning by writing the term manga as 萬画, meaning literally "ten thousand pictures."