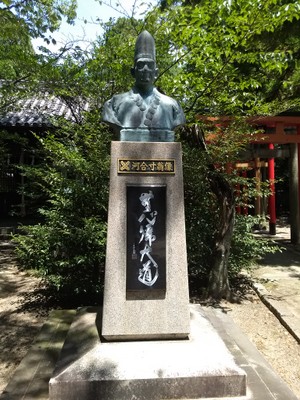 Bust of Kawai at Himeji Shrine

Kawai Sun'ô was a Sakai clan karô and kin'ô ("serve the emperor") adherent. He is known for his roughly 30 years of service to Himeji han, including overseeing significant financial reforms.

Born the son of karô Kawai Munemi in 1767 at the Himeji domain mansion in Edo, he attracted the attention of lord of Himeji Sakai Tadazane, who taught him tea ceremony, poetry, calligraphy, painting, and other pursuits. Tadazane's successor Sakai Tadamichi then granted him use of the character michi, allowing him to take on the name Michiomi. He later served under Sakai Tadamitsu and Sakai Tadanori, for a total of four successive lords of Himeji.

He succeeded his father to become Sakai karô in 1787, at age 20. In 1808, he was elevated to a leadership (katte) position, and undertook financial reforms in an effort to return the domain government to financial well-being. These efforts included expanding land reclamation for agricultural and salt-making use, establishing a number of workshops for raising silkworms, weaving, and dyeing as well as pottery kilns, and expanding the production and sale of cotton, Higashiyama-yaki pottery, Tatsuyama stone, and ginseng. In acknowledgement of his successes in benefiting the domain's finances, he was elevated to the higher rank among the karô (kamiza) and enjoyed a stipend of 5000 koku.

In 1821, Kawai established the Nijuzankô (Nijuzan Academy) outside Himeji castle to serve as his personal place for study. The school later became an official domain school, and played a notable role in training domain officials.