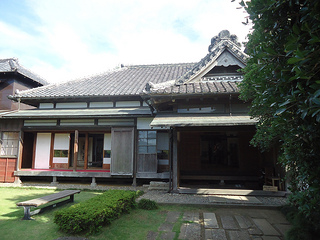 The main hall of the Juntendô. 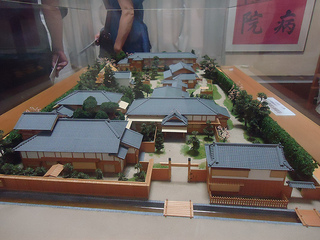 A model of the Juntendô, showing the complex at its fullest historical size.

The Juntendô was a Rangaku school in Sakura, Shimousa province (today, Chiba prefecture), founded in 1843 by Satô Taizen (1804-1872). It was perhaps the foremost site in Edo period Japan for the study, and practice, of Dutch (Western) medicine.

The school was founded in Sakura, at a site along the Narita kaidô, at the invitation of Sakura han daimyô Hotta Masayoshi. After studying in Nagasaki for a time, Satô Taizen had originally established a school in Edo, but then relocated to Sakura, turning over control of his Edo school to Hayashi Dôkai. In 1858, the school was rebuilt at its current location, across the street from the original location. Taizen's curriculum, implemented largely through the use of imported books, centered not only around the study of Dutch medicine but also on hands-on practice and experience, including the practice of internal surgery, as well as the study of the Dutch language. The school attracted students from all over the Japanese archipelago.

Taizen's adopted son Satô Takanaka (Yamaguchi Shunkai) studied medicine in Nagasaki with the Dutch military doctor Pompe, and then came to the Juntendô, where he took in a systematic medical education, studying and developing methods which continued to play a prominent role in how medicine was practiced in the Meiji period. He became head of the school upon Taizen's retirement in 1859.

Following the Meiji Restoration, the new Meiji government invited Takanaka to establish and run a medical school in Tokyo. The school, established in 1869, was called the daigaku tôkô, or "University East School," and later developed into the Medical School of the University of Tokyo; in 1873, Takanaka then also established the Juntendô-iin (Juntendô Clinic) in Ochanomizu, and Juntendô University. The latter was later inherited by Satô Susumu (Takawa Kaiseki), another adoptee into the Satô family. Meanwhile, the Sakura Juntendô passed into the hands of Takanaka's adopted son, Satô Shunkai (Okamoto Dôan)

The surviving Juntendô buildings were named a prefectural cultural asset in 1975, and were repaired and reopened as the Sakura Juntendô Memorial Buildings museum in 1985.