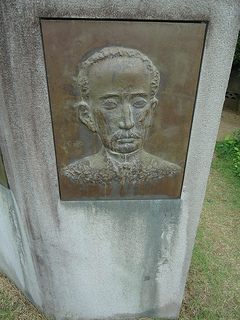 A monument to Satô Susumu at the Juntendô in Sakura

Satô Susumu was a Rangaku scholar and medical expert. He was the adopted son of Satô Takanaka, and his successor as head of the Sakura Juntendô.

Born into the Takawa family of saké brewers in Hitachi province, Susumu married Satô Shizu, the eldest daughter of Satô Takanaka, and thus became a member of the Satô family of Sakura. He served as a battlefield medic in service to Aizu han during the Battle of Toba-Fushimi, and, switching sides, served as a field medic for forces opposing the Northern Alliance in the later stages of the Boshin War. In 1869, Susumu traveled to Germany for study, and became the first Japanese to earn a degree from Berlin University. After his return to Japan, he became chief surgeon at the Juntendô Hospital in Tokyo. In 1888, he became one of the first in Japan to be formally granted a degree as a Doctor of Medicine (M.D.).

He later became director of the First and Second Hospitals at the Imperial Medical College, and in 1895 became Surgeon General of the Imperial Japanese Army, serving in that position in the Sino-Japanese and Russo-Japanese Wars. He was named a Baron (danshaku) in 1905, and died in 1921.