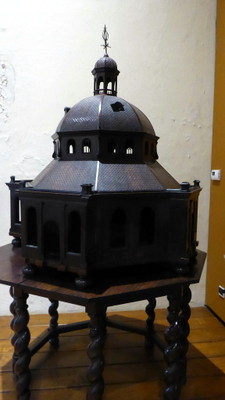 Model of the New Dutch Church, on display at the Jakarta History Museum

The Old Dutch Church (De Oude Hollandsche Kerk) in Batavia, later renovated and renamed the New Dutch Church (De Nieuwe Hollandsche Kerk), was one of the chief Protestant Churches in Batavia (headquarters of the Dutch East India Company; today, Jakarta, Indonesia). Jan Pieterzoon Coen and some 18 other governors-general of the Company and their relatives were buried in the church's graveyard. The site is today the Wayang Museum, a museum dedicated to Indonesian traditional puppet theatre.