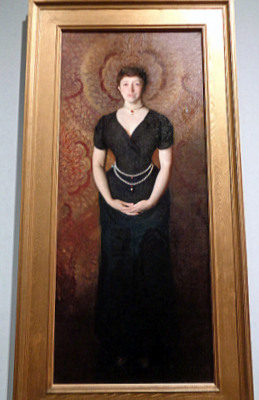 Isabella Stewart Gardner, as seen in a portrait by John Singer Sargent

Isabella Stewart Gardner was an art collector and a prominent figure in high society in Boston, New England, around the turn of the century. Through her friendship with Okakura Kakuzô and others, she played a role in the introduction of Japanese art to New England, and to the United States as a whole. Before her death, she transformed her home at Fenway Court into a museum, arranged according to her liking; today, the Isabella Stewart Gardner Museum is one of the most major museums in the city, and remains, in accordance with her will, arranged largely as she left it.

She and her husband visited Kyoto in 1883, and may have stayed at the temple Chion-in. In 1891, Isabella's father left her his fortune. With the help of Italian Renaissance expert Bernard Berenson and others, Mrs. Gardner acquired a large collection of European and Asian art. Following her husband's death in 1898, she then bought a plot of land in Boston's Fenway and began to have a house built to house the collection. Fenway Court, as she called the house, was completed in 1903, and it quickly became a major center of cultural activity, as Mrs. Gardner invited friends over for concerts, dinner parties, and the like.

Mrs. Gardner did not arrange objects in the house as most curators would a museum today; nothing is organized according to culture, period, or style, but rather according to her personal taste, juxtaposing works from different cultures and periods in order to suit a particular aesthetic sense. The collection includes a number of significant treasures: The Gardner's painting "The Rape of Europa" has been described as the greatest Titian work in a private US collection. The collection also includes portraits of Mrs. Gardner by John Singer Sargent and Anders Zorn, a self-portrait by Rembrandt, and works by Michelangelo, Fra Angelico, Giotto, Botticelli, Rubens, Velasquez, Van Dyck, Whistler, and Matisse. The museum is perhaps most (in)famous, however, as the site of the greatest still-unresolved art heist in American history; in a heist pulled off in the late 1990s, a pair of men stole a Rembrandt and a number of other priceless works which still have yet to be found today.

While a number of Japanese artworks can be found in the main sections of the Gardner Museum, Mrs. Gardner originally set aside one room as her "Buddha Room," decorating it with a number of Chinese, Japanese, and other works. As the result of a loophole which allowed the Buddha Room to not be counted as part of the museum, it was dispersed in the late 20th century, with many of the pieces being sold off to museums and private collections elsewhere in the country. This room, or perhaps a room in the basement, was often used by Mrs. Gardner to host Japan-related gatherings, at which Okakura Kakuzô often performed tea ceremony, with other significant Japan-related Bostonians such as Edward Sylvester Morse and William Sturgis Bigelow in attendance. Okakura eventually gifted Mrs. Gardner his tea set, including some pieces dating back to the Sengoku period; the museum retains not only the tea set, but even the boxes it was shipped in, today.