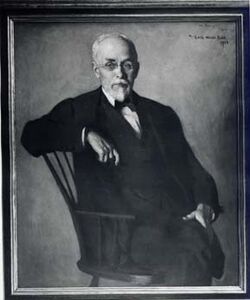 Edward Sylvester Morse was a pioneer in the study of Japanese ceramics and in their introduction to the West. A native of Maine, he originally traveled to Japan in order to study brachiopods - that is, shellfish - but became fascinated with porcelains and ceramics while there. His collections, which he later sold or donated to the Museum of Fine Arts, Boston and to the Peabody-Essex Museum in Salem, MA, remains today one of the most famous and most extensive collections of Japanese ceramics and folk objects in the world.

Morse's expertise in zoology was largely self-taught, but at a time when this was a burgeoning field, that did not stop him from being hired as a member of the staff of the Peabody Academy of Science in Salem, Massachusetts in 1867. He is said to have first gained an interest in shells and sealife around age 13 (1851), and in 1859, at age 21, he began studying at Harvard University under Louis Agassiz. After some friction with Agassiz, he quit studying at Harvard in 1861, and returned to Portland, eventually moving to Salem, Massachusetts in 1866, at age 28, and joining the Peabody Academy the following year.

Morse had no formal degrees from any university, but was granted an honorary PhD and hired as a professor by Bowdoin College in Maine in 1871.

He set sail in May 1877 for Japan, after having little success in finding live brachiopod specimens to study on the East Coast of the United States. The month after his arrival in Japan in June, he was offered a teaching position at the newly founded Tokyo Imperial University. While on a two-year contract at the university, he lectured on zoology and related subjects, and is credited with introducing the Darwinian concepts of natural selection and evolution to Japan; he engaged in numerous surveys of shells and mollusks, including an excavation of the Ômori shellmound, which he had discovered shortly after his arrival, noticing it through the window of the train as he rode from Yokohama to Shinbashi.

During this time, he developed as well a taste for Japanese ceramics. Though the pieces which initially caught his eye were, his friends told him, not of any particular age or quality, he was then introduced to more esteemed pieces, and quickly developed an eye for potter's marks (i.e. seals or stamps incised into a piece identifying the maker). Though Morse never learned to read Japanese, it is said he had an incredible memory and learned to identify a great many potter's marks; friends and colleagues taught him about the different types of glazes and clays.

Morse made another great contribution to the development of the study and appreciation of Japanese art when he wrote to a colleague in the US on behalf of the university, asking for suggestions for a professor of philosophy who could come to teach in Tokyo. It was as a result of this inquiry, albeit not the result of Morse's direct suggestion, that Ernest Fenollosa came to Japan in 1878; Fenollosa would go on to become an extremely influential figure in the appreciation of Buddhist art, the development of Japanese painting, and the introduction of Japanese art to the United States.

Morse returned to the United States in November 1877, less than six months after his initial arrival; he returned to Japan, however, the following April, and made trips to Hokkaidô and Tôhoku. The following year, in 1879, he traveled to Kyûshû and Kansai, and published his findings on the Ômori shellmound in both English and Japanese.

He returned to the US once again in September of that year, and in July 1880 became Director of the Peabody Academy of Science, a position he would hold for 36 years. In addition to his continued activities in the sciences, Morse, one of only a few New Englanders who had yet been to Japan or knew anything much about the country, gave a number of lectures on Japanese culture, and otherwise shared his knowledge and experiences. These lectures are said to have sparked the interests of many, inspiring in particular William Sturgis Bigelow, who would go on to become another major figure, alongside Morse, Fenollosa, and a small handful of others, in the origins of the Museum of Fine Arts Japanese collection, and thus in the introduction of Japanese art and culture to the US.

Morse returned to Japan for the last time in 1882, with Bigelow, and met up with Fenollosa and Okakura Kakuzô. In addition to a number of other activities he engaged in alongside these men, Morse spent these few months amassing a great collection of ceramics and other artistic and cultural objects which he then brought back with him when he returned to New England later the same year. He and his fellows did not scoff, however, at the idea that there was a value to the Japanese people of keeping such objects in Japan; though Morse and these other men did ship a great many objects back to the US, including some of great antiquity or importance, they also made great efforts to convince the Japanese government of the value of these objects at a time when Japan was focused on modernization and, arguably, to some extent, was dismissive or unappreciative of its own heritage.

Morse traveled the world, stopping in particular in London and Paris among other locations, on his way back to the US from Japan in 1882-1883, during which time he saw many other Western collections of Japanese ceramics, thinking his own collection superior, and refusing offers to sell individual pieces from his collection, as he wished to keep it intact. He traveled to Europe again in 1887, as a perk of his position as President of the American Association for the Advancement of Science, meeting again with numerous collectors and dealers, buying items with what little funds he had to fill in gaps in his collection.

During his three stays in Japan, Morse took extremely extensive notes and journals, the latter alone numbering as many as 3500 pages, from which selections were chosen and published - in two volumes of roughly 450 pages each - under the title Japan Day by Day in 1917. Morse also published a book entitled Japanese Homes and their Surroundings in 1885.

For a number of years, the Museum of Fine Arts could not raise the money to purchase Morse's collection, and Morse could not afford to simply donate it. Finally, after fundraising efforts led by Denman Waldo Ross and others, in 1890-1892, the Museum purchased the collection of roughly 5,000 ceramic objects for $76,000. Morse was named Keeper of Japanese Pottery and was paid a small stipend (a gesture in light of the fact that the Museum did not pay the full $100,000 at which the collection was valued at the time); in 1901, after ten years of work, the Museum published a catalogue of the collection, written/compiled by Morse. Meanwhile, Morse's collection of roughly 30,000 Japanese objects of everyday material culture of the Meiji period became the core of the Japanese collections at the Peabody-Essex Museum in Salem, Massachusetts.