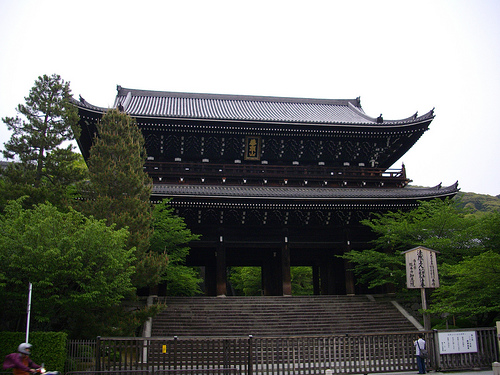 The main gate of Chion-in.

Chion-in, in Kyoto, is the head temple of the Pure Land Sect of Buddhism. The main gate of the temple is the largest in the country of that particular type or style.

Originally founded in 1234, the entire compound was rebuilt in the 1630s, under the patronage of Shogun Tokugawa Iemitsu. The hollyhock crest of the Tokugawa clan can be seen on the ends of many of the roofbeams.

Foreigners were allowed to stay overnight at the temple during the Meiji period; prominent travelers who did so included Mr. and Mrs. Jack Gardner of Boston. Painter John Lindon Smith may have stayed there in 1900; a painting by him today in the Isabella Stewart Gardner Museum[1] depicts the interior of the now no longer extant dai-hôjô (abbot's quarters), originally constructed in the early 17th century.