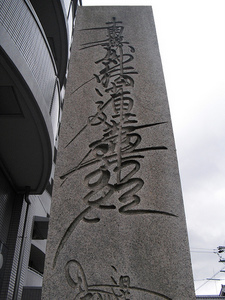 Today, a stele marks the site of the original Honkoku-ji, just north of Horikawa-Gojô.

Honkoku-ji is a Nichiren Buddhist temple in Kyoto.

The temple was originally founded in the 14th century by Nichijô, a student of Nichiin, who moved to Kyoto Roku-jô-dôri from Kamakura. Along with Myôken-ji, Honkoku-ji was considered of the "21 Nichiren honzan (head temples) of Kyoto."

In the Edo period, Korean tongsinsa missions invited by Japan stopped and stayed for a time in Kyoto. From 1636 onwards, Honkoku-ji was used to house members of seven Korean missions. All together, it was used to house roughly 400 people. The name of the temple was originally written with different characters, as 「本国寺」, but there was an admiration for Chinese and Korean scholarship; Tokugawa Mitsukuni (of the Mito branch of the Tokugawa clan), who had interacted with Korean ambassadors in Edo, supported the temple, so at some point the name was changed to 「本圀寺」, incorporating the character 'kuni' (or 'koku') from Mitsukuni's name.

When Korean missions came, each Kyoto shoshidai, as the representative of the shogun, came here to offer greetings, and held a banquet in honor of the guests. According to the diary kept by Kim In Gyon, a member of the 1764 mission, at that time Honkoku-ji had a five-story pagoda with a metal tip, and a garden well-arranged with stones, and bamboo plants. According to a shogunate record of the 1711 mission, monastic residences at many temples, including Shôrinin, Shôyôin, Honjitsuin, and Kujôin, were used to house Korean visitors.