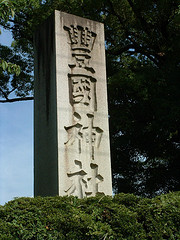 Toyokuni Shrine is a Shinto shrine in Kyoto dedicated to Toyokuni Daimyôjin, the deification of Toyotomi Hideyoshi. It is the head shrine of a network of Toyokuni shrines throughout the country.

Hideyoshi was deified, by Imperial decree, following his death in 1598, with the priest Yoshida Kanemi formally and ritually naming the deity "Toyokuni Daimyôjin." Toyokuni Shrine was established in Kyoto shortly afterwards, just outside Hideyoshi's Hôkô-ji temple,[1] and is said to have been the grandest site in Kyoto at the opening of the 17th century.[2] The grounds included the first tamaya, a particular type of Shinto altar dedicated to the spirit of a single individual, and a gravemound where, supposedly, hundreds of ears and noses taken off Korean warriors defeated in the Korean Invasions are buried.[3] Korean embassies to Edo were regularly shown this "ear mound" (mimizuka), in connection with demonstrating to them that the Tokugawa clan had vanquished and replaced their hated enemy, Toyotomi Hideyoshi. Toyotomi Hideyori granted 10,000 koku worth of land to the shrine.

An annual festival, Hôkoku jinja matsuri, was held for many years on the anniversary of Hideyoshi's death. An early 17th century painting by Kanô Naizen depicts the festival, and is famous for its depiction of Japanese in nanban (European) fashions.[4]

Branch shrines quickly proliferated throughout the country, as regional daimyô and other influential actors established them, as a show of worship or loyalty to the late Hideyoshi.

Sections of Toyokuni Shrine, along with its fief, were seized by the Tokugawa shogunate in 1615, and the chief object of worship relocated to Hôkô-ji and made inaccessible. As part of the shogunate's efforts to enhance its own power and legitimacy, promote the worship of Tokugawa Ieyasu as Tôshô Daigongen, and eliminate Toyotomi loyalists, the shogunate seized the remainder of the shrine lands & buildings in 1620, leaving only a small gravesite on the site. Many branch shrines across the archipelago were destroyed, as Tôshôgû shrines spread. Some regional Toyokuni shrines, and festivals dedicated to Hideyoshi, managed to slip by unnoticed by the Tokugawa authorities, and to survive.

The lead Toyokuni Shrine in Kyoto was re-established by the Meiji government in 1880 at the suggestion of the Meiji Emperor, along with a branch shrine in Osaka, and the Kenkun Shrine dedicated to Oda Nobunaga in Kyoto.[5]