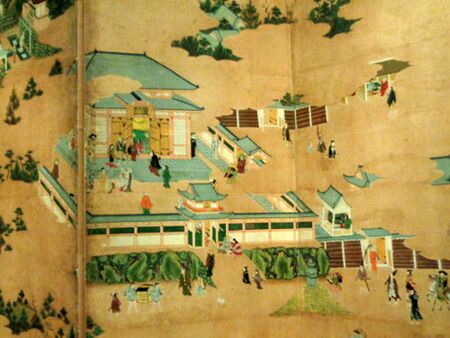 The Hôkô-ji is a Buddhist temple in Kyoto, originally established in 1595 by Toyotomi Hideyoshi. It is famous for the Great Buddha (Kyoto daibutsu) Hideyoshi had installed there, and for a controversy regarding the inscription on the bell Hideyoshi had installed, which Tokugawa Ieyasu claimed contained a hidden message of disrespect towards him.

The temple was originally built with the tallest Buddha Hall (butsuden) of any temple in Japan. At 48m high, roughly equivalent to fifteen stories, it was quite possibly the largest wooden building on earth for a time, larger even than the Buddha Hall at Tôdai-ji which arguably holds that distinction today.[1] The wooden statue of Dainichi nyorai contained within, constructed by the Shichijô bussho ("Seventh Avenue Buddhist [Sculpture] Studio")[2] was held together with nails and brackets made by melting down weapons collected in Hideyoshi's 1588 "Sword Hunt." Hideyoshi also installed at Hôkô-ji an Amida statue from Zenkô-ji, of particularly unique eminence as it was said to be not merely a representation of Amida, but genuinely alive itself. This statue was (and still is today) considered so sacred that it was transported in a closed box, and has never been shown to the public.

The Daibutsu-den (Great Buddha Hall) and the Great Buddha statue it contained were destroyed in an earthquake in 1596. Following Hideyoshi's death in 1598, he had himself deified as the great kami Hôkoku dai myôjin, and enshrined at Toyokuni Shrine (aka Hôkoku Shrine), which was erected adjacent to Hôkô-ji. Toyotomi Hideyori then worked to have the temple, and its Great Buddha, rebuilt. The recasting of the Great Buddha was complete in 1612, and secondary structures such as the bell towers by 1614. However, the temple still required shogunal authorization to be officially re-dedicated, and the Toyotomi and Tokugawa entered into extensive conflict over ritual protocols, with Tokugawa Ieyasu seeking to set ritual practices according to a hegemonic set of conventions, and Toyotomi Hideyori demanding that the rituals be performed as he saw fit. One set of letters, in particular, conveyed by Katagiri Katsumoto on behalf of the Toyotomi, drew ire from the Tokugawa, who interpreted them as containing a hidden message challenging Tokugawa hegemony. This served either as impetus, or excuse, for the siege of Osaka which ultimately eliminated the Toyotomi line.[3]

The temple was reduced in some respects by the Tokugawa shogunate, but was maintained, and even rebuilt following a fire in 1662. However, at that time, the nails and brackets of the wooden Daibutsu were melted down, yielding, supposedly, 40 million kanmon worth of metal. The Daibutsu was replaced with a wooden sculpture at that time (in 1664), and the great Amida was returned to Zenkô-ji.

The temple was spared in the Great Tenmei Fire, which destroyed much of the city in 1788, but ten years later, in 1798, the Great Buddha Hall was struck by lightning, and was destroyed in the resulting fire, along with the Daibutsu within.[1] Though extensive efforts were made to save the building, and the statue, with a chain of 10,000 people conveying buckets of water to put out the blaze, it was for naught in the end. On this terrible occasion, it is said that mysterious fireballs were seen in the skies over Edo, and that one even landed in the garden of Matsudaira Sadanobu.[1] The temple was rebuilt in 1843, but the Daibutsu was not. A smaller Buddha sculpture was housed in the rebuilt hall as the primary object of worship until 1973, when another fire destroyed the Great Buddha Hall once again. It has not been rebuilt.