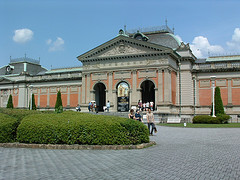 The main hall of the Kyoto National Museum.