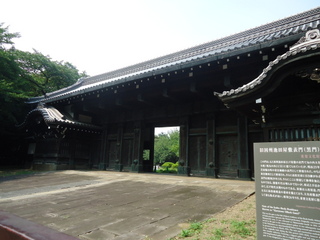 The main gate to the mansion, which stands today at the Tokyo National Museum.

As a result of the sankin kôtai system requiring daimyô to spend a certain portion of time in Edo, and requiring certain of their close relatives to remain in Edo on a long-term basis as hostages, most if not all han maintained mansions in the city.

The Ikeda clan of Inaba province[1] maintained their mansion in the Marunouchi area, as did many other daimyô. The main gate to this mansion survives today at the Tokyo National Museum. Known alternately as the Kuromon (lit. "black gate") for its color, the gate was moved in 1892 from Marunouchi to Takanawadai-machi, where it served for a time as the main gate to the Crown Prince's residence. It later was moved again, to serve as a gate for the residence of Prince Takamatsu, and was named an Important Cultural Property in 1951, before being relocated one last time, in 1954, to the grounds of the Tokyo National Museum, where it remains today. The museum displays it as a "highly formal example"[2] of a gate from a daimyô residence of the time.