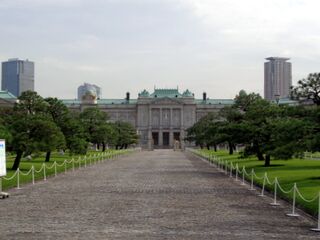 The main building of the Akasaka Palace, now called the Geihinkan.

The Akasaka Detached Palace is an Imperial Palace in Tokyo, originally built as an official residence for the Crown Prince. It is often cited as one of the great examples of Western-style Meiji period architecture.

The idea of building a palace for the Crown Prince originally came together in 1893, as the 30th year of the reign of the Meiji Emperor approached; it was felt that building a new palace would be a good way to place the Crown Prince - who might soon be ascending the throne as emperor - more prominently in the public spotlight. The palace was originally to be called Tôgû Gosho, or "Eastern Imperial Palace." A committee was formed three years later, including architectural specialists, and officials from the Imperial Household Ministry (Kunaishô) and other government ministries. They began work on the design of the building in 1898, and construction was completed in June 1909.

The Palace is located on a four square-kilometer plot that once was previously the site of the Edo period mansion of the Kishû Tokugawa. These grounds had been the site, from 1873 to 1889, of an Akasaka Temporary Palace, which served as the chief imperial residence during the construction of the Tokyo Imperial Palace. The Neo-Baroque structure draws upon German and Austrian palaces, among other influences, in its architectural style, and is surrounded by well-manicured hedges and gardens in the mode of the famous gardens at Versailles. The structure itself is two stories tall, roofed in copper tiles, and incorporates Neo-Classical elements, including pillars and pediments, as well as a considerable degree of left-right symmetry, very common elements in Imperial Meiji architecture conveying impressions of stability, order, and authority.

The interiors, covering a total of roughly 15,000 square meters, are lavishly decorated in a Rococo-style, with ornate arabesque wall-carvings, gilded highlights on marble columns with Corinthian capitals, and plaster moldings in the ceilings. Initially, the palace had only one full bathroom, though this is believed to have been an oversight in the design, rather than an indication of intentional design philosophy or Japanese cultural desires. Flooring in different sections of the palace includes marble, parquet (wood mosaic) floors, and lush burgundy carpet.

The Akasaka Palace also incorporated many modern conveniences from the very beginning, including electricity, hot and cold running water, and central heating. It was among the first buildings in Japan (and perhaps one of the first major buildings in the world) to incorporate electromechanical air conditioning, which was first invented in 1902, only seven years before the palace was completed.

The palace was refurbished in 1968-1974 and renamed the Geihinkan, or "State Guesthouse." It has since then served as the site of summits and conferences between heads of state, and other similar high-profile events.