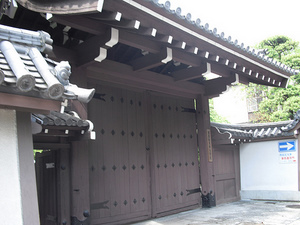 The surviving gate of a Satsuma han mansion built in Kyoto in 1862; the gate serves today as an entrance to the campus of Dôshisha University.

Most han maintained mansions in Kyoto during the Edo period, as well as in Fushimi, Osaka, and Edo. For those domains located in western Japan, such as Satsuma han, the Kyoto mansion offered a place for the daimyô and his men to stop, stay, and resupply during their journeys to and from Edo; the mansion also served as an outpost for the domain's political and commercial activities in the Kamigata (Kyoto-Osaka) region.

Beginning in 1688, Satsuma was permitted by the shogunate the privilege of selling its Chinese goods (obtained through Satsuma's relationship with the Ryûkyû Kingdom) through an officially authorized wholesaler in Kyoto. It is unclear where in the city this wholesaler was based (most likely in Nishijin), but the Satsuma officials at the Kyoto mansion would have been closely involved in the logistical and financial concerns related to the operation. This spurred the domain to begin more strongly enforcing Tokugawa anti-smuggling laws within its territory, whereas previously Satsuma flaunted the maritime restrictions policies to a certain extent, allowing or even encouraging Chinese merchants to trade at various ports along the Satsuma coast, rather than redirecting them to Nagasaki as shogunate policy dictated.[1]

Satsuma's mansion, for the majority of the Edo period, was located near the intersection of Nishiki-kôji and Higashi-no-Tôin streets[1]. However, as that space was deemed too small, a new mansion was built in 1862, near Karasuma-Imadegawa, just north of the Kyoto Imperial Palace.[2] The new mansion covered 5,805 tsubo, or approx. 19,000 square meters. The complex consisted of nine major wooden buildings and numerous earthen storehouses, and became, for the remaining few years of the Bakumatsu period, a major center for anti-shogunate activity.

The site of this 1862 Satsuma mansion is today the main Imadegawa campus of Dôshisha University. One of the main gates to the compound survives and continues to be used; it stands near the southwest corner of campus and is popularly known simply as the daimyômon, or "Daimyô's Gate." The campus is surrounded by walls in the style of that which might have been built for the daimyô mansion, but it is unclear if these are authentic, or a later (re)construction. Signs and a stone marker at the west (Karasuma) entrance to campus identify the grounds as the former site of this 1860s samurai mansion.