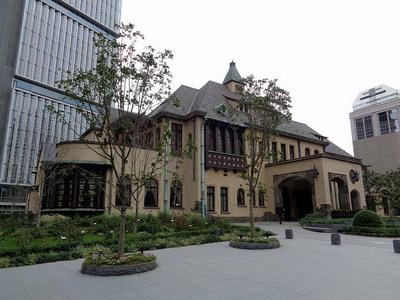 The "Classic House at the Akasaka Prince," which stands today on the former site

The Kishû Tokugawa clan were one of the Gosanke, three collateral houses of the main Tokugawa clan line of shoguns descended from Tokugawa Ieyasu. The former site of their extensive mansion in Edo, just outside the moats of Edo castle, served briefly as a temporary Tokyo Imperial Palace in 1873 to 1889, during which time a Western-style residence for Prince Kitashirakawa Yoshihisa, designed by Josiah Conder, was also built on the grounds. By 1912, the Imperial family was no longer actively using the site, and in 1930, it became the site of residences for the Yi family, the former Korean royal family who had now been made kazoku (Japanese aristocracy, alongside former daimyô and courtiers).

The extensive grounds which were once controlled by the Kishû Tokugawa have today been significantly divided up, with a variety of apartment buildings, office buildings, shopping centers, and the like occupying various parts of the space. The section of the grounds formerly home to Western-style residences for Prince Kitashirakawa, and later for the Yi family, is today maintained by the Akasaka Prince Hotel as a luxurious restaurant and lodging.

With the former sites of the Owari Tokugawa clan and Ii clan mansions being located nearby, the neighborhood was formally named Kioi-chô in 1872 (taking Ki from Kishû, o from Owari, and i from Ii).

The structures of the former Kishû mansion were used as the Imperial Palace for over fifteen years, from 1873 when Edo castle was destroyed in a fire, until 1889, when the Imperial family took up residence in the newly completed Tokyo Imperial Palace.

Many historians have simply written of "the Imperial Palace" in this period, without acknowledging (or perhaps without realizing) that it was this Akasaka Temporary Palace, and not the "true" Imperial Palace at the center of the city, where the events they are describing took place. But considering the history, it becomes clear that visiting dignitaries such as King Kalākaua of Hawaiʻi and former US president Ulysses S. Grant, among many others, would never have seen *the* Tokyo Imperial Palace, but rather that their meetings with the Emperor, and indeed all events throughout this 15-year-period taking place "at the palace" in fact took place at this Akasaka Temporary Palace.

During the time the Imperial family was employing these grounds as a temporary Imperial palace, one section was given over to Prince Kitashirakawa Yoshihisa for his use, and the use of his family. He had the famous architect Josiah Conder design a two-story brick residence in the Gothic style, which was completed in 1884. Sadly, only ten years later the structure was significantly damaged in an earthquake, and sections of it had to be dismantled.

By 1912, the Kitashirakawa family moved to new residences in the Takanawa neighborhood.

A new residence was completed on the site in 1930, for the use of the former Korean royal family.

The former site of the Kitashirakawa mansion (and later the Yi mansion) is today known as the "Classic House at Akasaka Prince."

Conservation and construction efforts in 2011 uncovered a portion of the remains of the Kitashirakawa/Conder brick building.