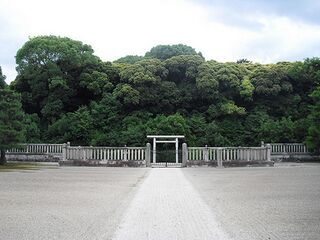 The site of the mausoleum of Emperor Kammu, as it appears today following the re-figuration of Imperial tombs under the State Shinto of the Meiji period

Burial practices in Japan have changed considerably over time, and historically varied considerably according to social class, among other factors. Since the introduction of Buddhism in the 6th century or so, that tradition has dominated burial and memorial practices for the vast majority of Japanese, albeit with some notable exceptions: Imperial burials, for example, were divorced to a great extent from Buddhist trappings in the Meiji period, and continue to be surrounded by constructions of State Shinto today. 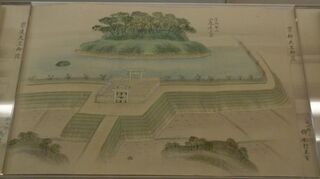 The mound-tomb of Emperor Sujin, as depicted in an 1867 handscroll painted by Okamoto Tôri

From roughly the 3rd to 7th centuries CE, local elites across much of the Japanese archipelago were buried in massive tumuli, or tomb-mounds, called kofun. The Kofun period of Japanese history is named after this practice. Kofun varied greatly in size, and experienced some notable shifts in shape over time. The largest were centered in the Kinai (Kansai) region, though a great many can be found across western Japan, including in Kyushu, as well as on the Korean peninsula. Kofun were often topped or surrounded by clay figures known as haniwa, which are believed to have performed some kind of spiritual protective function, or perhaps to have simply served as ornamentation, signalling the wealth or power of the occupant of the tomb. The tombs were composed largely of earth, atop a core of stone corridors, containing one or more chambers of grave goods, including weapons, armor, pottery, and magatama beads.

Commoners during this time were often buried in clay pots. Fields of such pots have been uncovered. 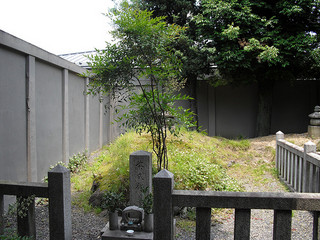 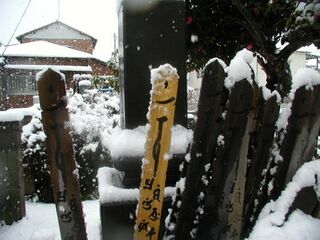 A group of sotoba at Negishi Cemetery in Yokohama 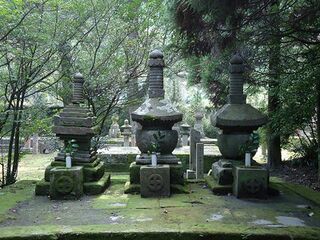 The graves of Shimazu Ujihisa (d. 1387) and his wife and daughter, at Fukushô-ji in Kagoshima 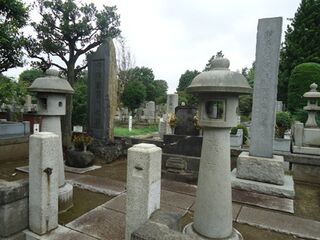 The graves of John Manjirô and his family, at Zôshigaya Cemetery in Tokyo

The spread of Buddhism brought the decline and eventual disappearance of the kofun. Bodies continued to be buried, however, for some centuries before the practice of cremation became standard.

As late as the Heian period, most graves, including those of top-ranking aristocrats, were left unmarked. The early 12th century text Eiga monogatari is among the earliest describing the visit of a member of the Fujiwara clan to his father's grave, and even in this case the grave is unmarked, and the individual expresses his woe at being unable to find its precise location. The practice of cleaning or maintaining gravesites was also not standard at this time, and so he finds his father's grave (or, at least, its rough vicinity) overgrown with weeds. Prof. Hank Glassman suggests that the advent of the custom of visiting and maintaining gravesites may have been spurred by the adoption into Japan of Song Dynasty Neo-Confucianism, which emphasizes filial piety (devotion and loyalty to one's parents).[1]

The earliest grave markers were likely flat wooden slats, carved at one end into the shape of a gorintô stupa. By the 12th century or so, these developed into fully three-dimensional wooden gorintô (wooden grave markers roughly in the shape of a five-story pagoda), and then later into stone ones. The custom of employing wooden slats survives, however, and it is quite standard today for the family of the deceased to pay Buddhist monks to inscribe Chinese & Sanskrit calligraphy on new wooden slats, called sotoba, every day for the first week after burial, and on an annual basis from then on.[1]

This practice of marking graves with wooden, and later stone, markers is believed to have been imported from the Continent, although the gorintô form is a distinctively Japanese one, and does not generally appear on Chinese graves. The first stone gorintô grave markers were erected for members of the aristocracy, and elite monks, by Chinese stonecarvers who had been brought over to Japan to aid in the reconstruction of the great temple at Tôdai-ji, in Nara, which had been destroyed in the Genpei War (1180-1185). Some of the very first such stone gorintô grave markers may have been erected at Mt. Kôya. The practice quickly spread, however, with stone markers of this type appearing in places as disparate as Hiraizumi (in the north, modern-day Iwate prefecture) and parts of Kyushu less than a century later. Yi Xingmo and a number of the other Chinese stonemasons remained in Japan, with their disciples and descendants developing into the Ôkura and I (Yi) schools of stoneworking.[1]

From Emperor Kômyô (1336-1347) onwards, for a time, Emperors were buried at sites chosen by Buddhist ritual, nearby to a major temple; funerary rites associated with cremation were employed, but the bodies were actually buried.[3] Beginning with Emperor Go-Kôgon (1352-1370),[4] a number of emperors were buried in simple graves, and without tumuli, at Sennyû-ji; Emperor Go-Hanazono was an exception.[2]

As in earlier periods, burial practices in the Edo period differed considerably by hierarchical class. The tomb of Tokugawa Ietsugu (d. 1716) at Zôjô-ji is perhaps indicative of the typical form of shogunal burial. A small stone pagoda-like structure stands at the center of a stone platform, ringed by a stone fence. The shogun is buried some distance below, underground, in a wooden coffin, within another wooden (paulownia) casket, within a burial chamber of cut stone.[5] Shogunal tombs at Kan'ei-ji are each located within their own distinct section of the cemetery grounds, each with their own lavish vermillion-painted gateway, ornamented with a plaque inscribed by the Emperor himself.[6]

The grave of Makino Tadakazu (d. 1735), lord of Nagaoka han, at the Makino clan family temple of Saikai-ji in Tokyo, might be taken as an example of a typical daimyô burial. Makino is also buried in a double set of wooden caskets, within a cut-stone burial chamber, though the above-ground portion of the tomb is far less extensive. It consists chiefly of a single hôkyôintô pagoda-like stone marker.[5]

The grave of a hatamoto of 400 tawara income, at Jishô-in, consists of a stone dolmen burial chamber, containing a Tokoname ware ceramic pot, within which the body was interred.[5]

For at least some portion of the commoner population, it was common to be buried in wooden caskets, sometimes rather roughly made ones, and buried alongside numerous others.[5]

A reconfiguration of Imperial burial practices was one of a number of key elements of the Meiji government's anti-Buddhist policies, and construction of State Shinto. Emperor Kômei (d. 1867) was the last emperor to be given a Buddhist funeral. When his consort, Empress Dowager Eishô, died in 1897, she was given a funeral in the newly invented tradition of State Shintô, albeit on the grounds of Sennyû-ji. This was the last Imperial funeral to take place at a Buddhist temple. Their son, the Meiji Emperor, was given a State Shintô funeral following his death in 1912. A temporary structure called the sôjôden was constructed at the Aoyama Parade Grounds (today, the outer gardens of Meiji Shrine), where a funeral ceremony was performed before placing the imperial casket on a funeral train to Kyoto. The grave of the Meiji Emperor, the last emperor to be buried in Kyoto, was erected in Fushimi-Momoyama, near that of Emperor Kammu, the first to rule in Kyoto, and the first to be buried there. Both subsequent emperors after Meiji have been buried in Tokyo, at the Musashi Imperial Graveyard in Hachiôji.[7] 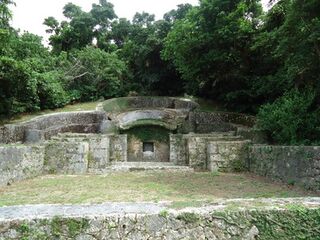 The Ginowan-udun tomb in Sueyoshi Park. An 18th century tomb where members of the Gushichan and Ginowan-udun princely lineages were interred

Burial in pots laid in natural caves or under rock outcroppings was once standard, but was later replaced by more elaborate stone tombs. Stone tombs in the form of houses, called hafû baka ("roofed graves"), are one of two chief forms these take; the royal mausoleum of Tamaudun is the most prominent example of this style. The Ginowan-udun tomb in Sueyoshi Park, in Naha, is a famous example of the other, particularly distinctive, Okinawan style of tomb, which is said to resemble a turtle shell. Such tombs are called kaami nu kuu baka ("tortoise shell graves").[8] The practice of constructing tombs in this "tortoise-shell" style first spread to Okinawa from southeastern China in the 17th century, and became popular among the scholar-aristocrat elites, and then among the broader population by the end of the 18th century.[9] This spread of Chinese-style tombs coincided with the spread of popularity of feng shui, and with a sinification more broadly of many aspects of Ryukyuan culture in the 18th century.[10]

Mound tombs remained quite common in Okinawa into the early modern period, and today it is quite standard among Okinawan people to have the whole family buried in a common family tomb. While Japanese families may also share a family tomb, with the cremated remains of family members being interred under a common tombstone, Okinawan tombs are small stone structures unto themselves, with several chambers under a single roof. When a family member passes away, their body is placed within the central chamber, and some time later the bones are washed in a ritual known as senkotsu (lit. "washing bones"), and placed in a ceramic or stone urn, which is then interred alongside the urns of other family members in one of the tomb's side chambers. Living family members gather and picnic in a small stone-paved area immediately in front of the tomb on shiimiisai, a grave-cleaning festival related to the Qingming Festival observed in China. This small paved area may have been conceived of as a space for collecting and storing qi, in accordance with feng shui philosophies.[10]