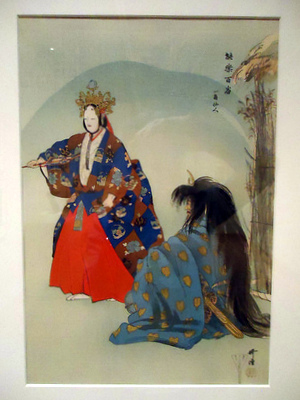 A scene from the Noh play Ikkaku sennin, in a print by Kôgyô

Tsukioka Kôgyo was a woodblock print artist of the Meiji period, known especially for his multiple series depicting characters and scenes from the Noh theatre.

His interest in Noh is said to have been inspired in Kôgyo by his stepfather and teacher, the ukiyo-e artist Tsukioka Yoshitoshi.

Kôgyo's largest Noh series is known as Nôgaku zue ("Pictures of Noh"). Published in Tokyo in 1897-1902, it consists of images representing 261 plays from the Noh repertoire, bound into five orihon (accordion book) albums. He later produced three other such series: Kyôgen gojûban, fifty images from the kyôgen theatre, bound into a single volume; a second five-volume set of Noh images entitled Nô taikan; and a final set of one hundred images called Nô hyakuban, published in 1926, one year before his death. These are said to have played a key role both in the survival, or revival, of Noh in the early 20th century, when it was challenged by many new forms of performance and entertainment, as well as having a significant impact on how Noh is depicted or represented today.