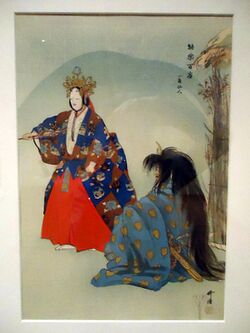 Ikkaku sennin is a Noh play by Konparu Zenpô, based on earlier Japanese stories/traditions of the sennin (Daoist immortal, or magical being) Ikkaku, deriving originally from traditional Indian tales.

It stands as an example of Zenpô's style of furyû Noh, incorporating more elaborate sets than most plays, and greater dramatic tension and action.

The kingdom of Harana has been suffering from drought since Ikkaku sennin fought and captured the Dragon Kings (dragons are associated with rain and water in East Asian myth). A minister from the kingdom, along with Madam Senda, go to meet Ikkaku, and to attempt to convince him to free the Dragon Kings. They pretend to be travelers who have gotten lost, and manage to invite themselves to have wine with the sennin. Mesmerized by the beauty of Madam Senda, Ikkaku gets drunk, giving the Dragon Kings a chance to escape. They do so, after performing a martial dance over their incapacitated captor.