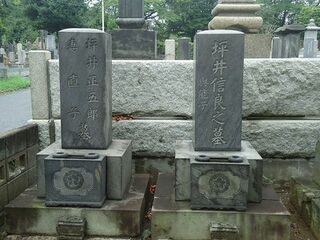 The graves of Tsuboi Shôgorô, his wife Naoko, and his father Tsuboi Shinryô, at Somei Cemetery in Tokyo

Tsuboi Shôgorô is considered one of the founders or fathers of anthropology and archaeology in Japan.

Born in Edo in 1863 the son of Tsuboi Shinryô, Shôgorô went on to attend Tokyo Imperial University; he was one of three men from the university who made the very first discovery of Yayoi period materials in 1884, just outside the campus.[1] Tsuboi graduated from the Imperial University in 1886, and founded the Tokyo Anthropological Society that same year. After studying abroad for a time in England and France (including with E.B. Tylor, a prominent early figure in British archaeology), he become a professor at his alma mater in 1892.

Shôgorô reportedly received severe reprimands from the Imperial Household Agency after excavating kofun in Kyushu in the late 1880s-1890 which had been, at that time, in the process of being identified as imperial tombs; though remaining prominent and active in the archaeological and anthropological professional field and in related activities, he reportedly acquired an aversion to kofun excavations and even to some extent to Kofun period topics after that.[2]

Among his many works of scholarship, Tsuboi proposed and advocated for the theory that the first indigenous people to occupy the Japanese islands were a people who appear in Ainu legends as the korpokkur. His so-called "korpokkur theory" was hotly debated by others of the time.

In 1903, he played a key role in organizing the "Pavilion of Mankind" (Jinruikan) at the Fifth Domestic Exposition in Osaka. This pavilion is infamous today as a classic example of the "human zoo," commonly practiced by many colonial powers at that time, and seen also at the 1904 St. Louis World's Fair; at Tsuboi's pavilion at Osaka, Ainu and Taiwanese aborigines were put on display, in mock recreations of their traditional clothing and homes, to be seen by visitors to the expo. Okinawans famously refused to be put on display, and somehow were permitted to exempt themselves.