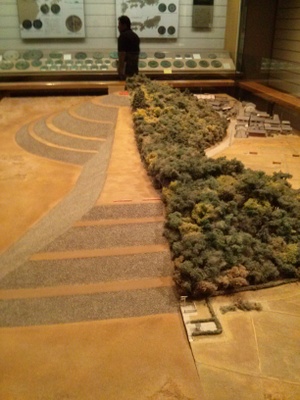 Kofun are tomb mounds, erected mainly from the late 3rd century to the early 7th century, a period known as a result as the Kofun period. Outside of this historical period, the term funkyûbo 墳丘墓 is used instead.

This mode of burials for local or regional elites, along with the technology or techniques for doing so (e.g. earthmoving, quarrying and carving of stone, construction of stone burial chambers, etc.) is believed to have come from cultural interactions with communities on the Korean Peninsula, where similar burial modes were practiced. Though they resemble natural hills, and were initially built atop natural hills for more impressive size, kofun are manmade mounds, built up over burial chambers. From the fifth century on, they began to be built up from flat areas of land, though some of the latest kofun, from the sixth century, were built on mountainsides. Kofun can be found in a wide variety of sizes and shapes, though the most famous and distinctive ones are keyhole-shaped, with a circular section connected to a fan-shaped section, and are quite impressive in size. Some of the earliest massive-scale tomb-mounds in Japan appeared in Izumo province, and took a form with a rectangular platform on top and long extended "legs" extending out from each of the corners.[1]

The largest and most famous kofun are mainly concentrated in the Kinai region (in and around Nara, Osaka, and Kyoto), with the single largest, believed to be the tomb of Emperor Nintoku, boasting twice the volume of the Great Pyramid of Giza, and standing 36 meters high and 486 meters long.[2] However, roughly 150,000 smaller tomb-mounds have been identified throughout much of Honshû, Shikoku, and Kyushu. One hundred and ninety-six kofun are officially recognized in Kumamoto prefecture alone.[3]

Large kofun were typically located at some distance from the settlement, and were topped or ringed with clay figurines known as haniwa. The tombs themselves generally contained one or more burial chambers, with stone coffins and a variety of burial goods, including mirrors, magatama beads, and other ornamental or luxury objects; from the fifth century, these began to be accompanied by swords, helmets, armor, saddles, and the like.[2]

Kofun could be entered in generally one of two ways:

This article is a placeholder or stub. You can help SamuraiWiki by expanding it.
Retrieved from "http://samurai-archives.com/w/index.php?title=Kofun&oldid=41533"
Categories: