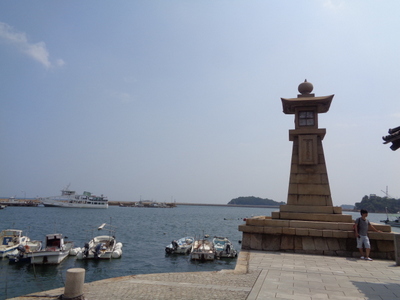 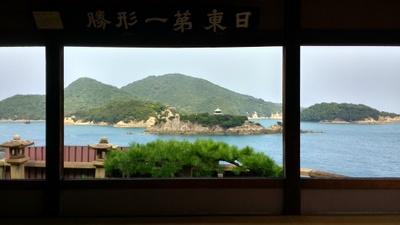 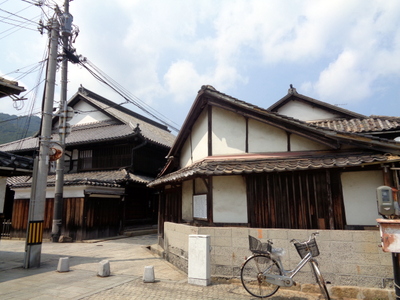 Tomonoura is a harbor in modern-day Fukuyama City, Hiroshima prefecture, which historically was a significant Inland Sea port and castle town. It was a port of call along the Western Circuit shipping route of the kitamaebune, and a formal maritime post-station (umi no eki), regularly hosting daimyô on sankin kôtai journeys and Ryukyuan, Korean, and Dutch embassies to Edo, as well as shogunal officials and official shogunal cargo shipments. Tomo is today the only site in Japan to still possess all five of what are said to be the key elements necessary for an Edo period port: a jôyatô lighthouse lantern, gangi (steps leading directly into/out of the water), a funabansho (port guardhouse), a namidome (breakwater), and a tateba (drydock for ship repairs).[1]

Even since ancient times, Tomo's natural geography made it an ideal harbor for ships to wait for the right winds and tides (shiomachi, or "waiting for the tides," frequently appears as a theme in poetry and literature about the port, going back even to the Man'yôshû).[2] As early as 1607, the town is said to have been fairly densely packed, the homes "like the teeth of a comb,"[3] at a time when nearby ports such as Mitarai are said to have had no elite houses at all, developing a sizable population only in the 18th century.[4] Korean envoys visiting Tomo ten years later (in 1617) wrote that Tomo was even greater than Shimonoseki.[5] By the 1760s, Tomo boasted some 1,465 buildings, housing around 5,860 people.[6]

Tomo castle was built in 1607 as well; it featured a three-story tower keep (tenshu), Ôtemon, and yagura. Fukushima Masanori granted the castle and an associated 8,131 koku fief to his retainer Ôzaki Genba, who in turn likely had some 342 retainers under him.[5] Though the castle's main keep was torn down in 1619 in keeping with the "one castle per domain" policy of the Tokugawa shogunate, Tomo nevertheless continued to develop as a castle town. By the end of the 17th century, it was divided into seven districts within the castle's outer moats: Hara-machi, Kaji-machi, Ishii-machi, Seki-machi, Michikoshi-machi, Nishi-machi, and Eura-machi. As in many castle-towns, these were divided into areas directly associated with the castle, samurai residential neighborhoods, and townsmen (commoner) neighborhoods. After one further castellan, Mizuno Katsutoshi, Tomo came to be overseen not by a "lord" but by a Magistrate known as the Tomo bugyô. A man named Hagino Shin'emon was the first to hold this post. From that time forward, the town began to shift once more away from being organized as a castle-town, towards a more dominant port-town character.[7]

Even so, a guardhouse (Tomo bansho) was maintained on the island, due to its economic and strategic importance. The guardhouse was located within the moats of the castle, and featured an archery range within its grounds. It was staffed by some seven or so retainers assigned by Fukuyama han, who were referred to as the Tomo zaiban shû. Along with the Tomo bugyôsho, the bansho also received petitions from the townspeople, and issued furegaki and other messages or edicts from Fukuyama, or from the shogunate.[8]

Like many Inland Sea ports, the harbor at Tomonoura features a set of granite steps known as gangi in place of, or in addition to, wooden piers; crews and passengers arriving in the harbor disembarked from their boats directly onto these stone steps as they stepped up onto land. The gangi extant today, repaired most recently in 2017, date to 1811. The large stone lantern that has become something of a symbol or icon of the town was most recently re-erected in 1859.[2]

A teahouse (chaya) was also established on the island by the lords of Fukuyama, to use as their personal lodgings, or simply as a place to rest, when they visited the island. The lords regularly stopped here on their sankin kôtai journeys, as well as at other times, e.g. for fishing. Tomo is said to be the place the lords visited most often (outside of the castle-town of Fukuyama itself). High-ranking Fukuyama retainers also sometimes were permitted to rest or lodge there.[8]

A group of Elders (宿老, shukurô) served as representatives of the townspeople, akin to village headmen, though it is unclear whether they were selected by the townspeople, or appointed by the domain. They concerned themselves with the general livelihoods of the people, conveyed the townspeoples’ wishes, and took part in a variety of regular activities of the town. The Elders were also the chief figures present when receiving the lord of Fukuyama, or seeing him off, when he visited Tomo, including when he was leaving for or coming back from sankin kôtai; giving him formal greetings at the teahouse, Tomo bugyôsho, or bansho; giving greetings on both celebratory and non-celebratory occasions, including on New Year’s; and receiving and seeing off the Tomo bugyô or metsuke on certain occasions.[9]

One of the chief famous local products (meibutsu) is a form of medicinal liquor called homeishu (保命酒). The Nakamura family, known for their homeishu, also hosted daimyô, Ryukyuan embassies, court nobles, and other elite visitors in a set of buildings which together functioned as the town's honjin; two of those buildings are today known as the Ôta family house (Ôta-ke jûtaku) and the Chôsôtei, and have been designated National Important Cultural Properties.[10] Another establishment in the town, known as the Neko-ya, was run by goyô shônin in service to the Shimazu clan, and also regularly provided accommodations to the Shimazu and to Ryukyuan missions.[11] Headed in each generation by Neko-ya Kiyosuke, the shop specialized in marine products.

For a brief time in the early Edo period, Tomo was also home to a designated inn maintained by the factor of the British East India Company based in Hirado. When Korean missions stopped in Tomonoura on their way to and from Edo, the Korean lead envoy typically stayed in a guest room at the Buddhist temple of Fukuzen-ji; the guest room was known as Taichôrô (対潮楼), and is said to have offered a beautiful view of the Inland Sea. Many plaques, works of calligraphy, and the like given as gifts from Korean envoys remain in the temple's collection today. A tree near the temple, known as that Muro no ki, is mentioned in a poem by Ôtomo no Tabito.[12]

Komatsu-dera (小松寺), a Rinzai Zen temple of the Myôshin-ji branch located near the harbor is home to the grave of Shô Dôkyô Yoseyama Peechin, a musician and member of the 1790 Ryukyuan embassy, who died on the way to Edo on 10/13 in that year. A plaque was later donated to the temple in his memory, by Yoseyama's grandfather, Fukuyama ueekata Chôki. Another plaque, hanging over the main gate to the temple, features calligraphy by a man named Wu Taihe, but little else is known about this figure.[13]

Tomonoura is also home to the shop of Uoya Manzô, where Sakamoto Ryôma engaged in negotiations surrounding the Iroha-maru Incident.[10] In total, some 102 Edo period buildings, 85 Meiji period buildings, and 270 later prewar buildings, together, have been designated by Fukuyama City as a dentôteki kenzôbutsugun hozon chiku, or "Protection District for Groups of Traditional Buildings," though this has not yet been taken up the national-level Agency for Cultural Affairs.[14]

A small island known as Sensuijima lies just off the coast from the town, and is accessible by regular ferries. The name of the island derives from a legend in which a Taoist immortal (sennin), intoxicated by the natural beauty of the area, lay down, and became an island. The island is roughly six kilometers around, and rises to the 154m Ômisen mountain at the center. Another peak on the island is known as Gozen-yama. It is officially part of the Setonaikai National Park, which was established in 1934. A number of much smaller islands, including Benten-jima (also known as Hyakkan-jima, home to a Benten shrine) and Kôgô-jima, surround Sensuijima.[15]