The Battles of Coxinga 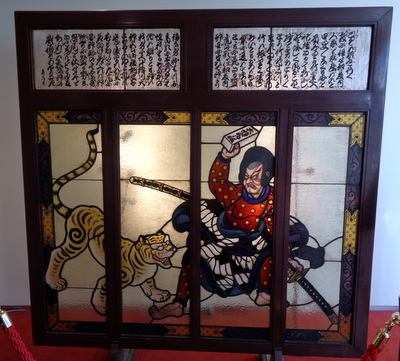 A scene from the play as seen in a Taishô era stained glass piece from Kabuki-za, designed by Ogawa Sanchi.

"The Battles of Coxinga" is a ningyô jôruri (bunraku) and kabuki play written by Chikamatsu Monzaemon. Loosely based on the historical figure of the Ming loyalist Zheng Chenggong (aka Coxinga), it was the first puppet play to be adapted to the kabuki stage. Exceptionally popular, it continued to be staged for seventeen months straight after its debut.[1]

The play centers on the half-Chinese, half-Japanese Coxinga, called Watônai (lit. "between Japan and China") in the play, who fights to defend the noble and great Ming Chinese from barbarian (Manchu) invasion. Marius Jansen, in describing Edo period Japanese popular views of China, writes that the play shows the Chinese as good people, but cowardly and inferior at fighting; Watônai fights with Japanese prowess, a sword imbued with the power of the Japanese gods, and a special charm from Ise Shrine which brings the power of Amaterasu herself against his foes. Disparaging the Manchus (and possibly the Chinese as well) for looking down upon Japan as a small country, he cries "have you learned now the meaning of Japanese prowess, before which even tigers tremble?"[2]