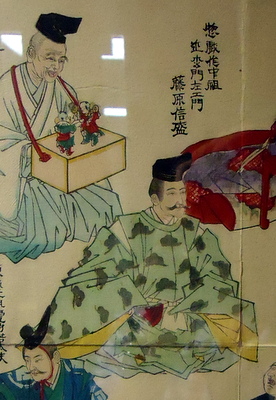 Chikamatsu Monzaemon is among the most famous of Edo period playwrights, sometimes even being called "the Japanese Shakespeare."[1] Many of the most famous ningyô jôruri (bunraku puppet theatre) plays were written by Chikamatsu, and his influence upon both the puppet theatre and kabuki was profound. Along with Ichikawa Danjûrô I in kabuki, Ihara Saikaku in literature, and the likes of Yoshida Hanbei and Nishikawa Sukenobu in woodblock prints, Chikamatsu is considered one of the chief figures of the Genroku period, helping establish or create art forms which would go on to become some of the most prominent and distinctive of Japan's traditional arts.

Chikamatsu, whose real name was Fujiwara or Sugimori Nobumori, was born into a minor samurai family in Echizen province. He spent a brief time as a monk, then returned to secular life, entering the service of a court noble in Kyoto, before establishing himself in Osaka in 1705.

Starting at around age 30 (c. 1683), he would become one of Japan's most prolific and beloved playwrights, composing as many as 160 plays for the Kabuki and Bunraku (puppet) theatres. Many of his pieces were historically based and as many were on contemporary subjects that appealed to the common people. One of his favored devices was the tragic love between either a samurai or a townsman and a courtesan. In most of his plays, he presented a moral dilemma - the hero was presented with the conflict of duty (giri) and emotion (ninjô) - of what society expected and with what the hero felt in his heart. Among his most famous works were the shinjû, or "love-suicide" plays. It may be that part of his ability came from the demands of writing for the Bunraku - he once commented that writing for that stage required him to make his dialogue as compelling and vivid as possible, given that, after all, the audience was looking at simple puppets.