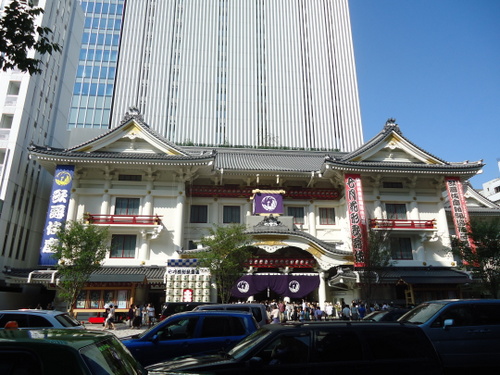 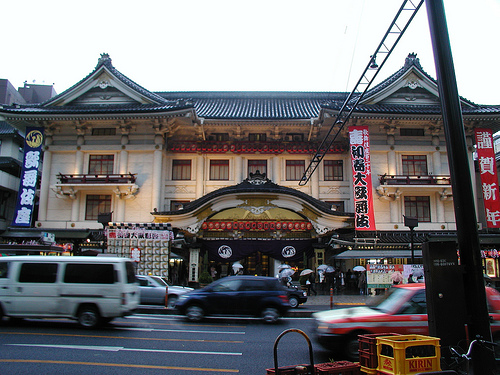 Kabuki-za, located in the Ginza in Tokyo, is the chief kabuki theatre in Japan. Throughout its existence, since its establishment in 1889, it has been the chief site for revivals, premieres, shûmei (name-taking) celebrations, New Year's performances, and other major events in the modern history of kabuki. Destroyed four times, it has always been rebuilt in a fashion faithful to its original, Meiji period appearance.

Kabuki-za first opened on 21 November 1889, in a rather Western-style building. The three-story interior is said to have been in Japanese design, constructed chiefly in cypress, but with experimental touches including a ceiling composed of one hundred cypress beams spreading out in a circle, like the bones of an umbrella. This was replaced in 1911 by the second Kabuki-za, constructed in the now-iconic hybrid style, incorporating elements of Azuchi-Momoyama or Edo period castle architecture.[1]

The theatre was destroyed in an electrical fire in 1921; reconstruction was delayed by the 1923 Great Kantô Earthquake but was completed in 1925. The building was then destroyed again in the 1945 Allied bombing of Tokyo, and was rebuilt yet again, this time in concrete, reopening on January 1, 1951. This first postwar incarnation of the building (the 4th overall) was declared a Tangible Cultural Property (yûkei bunkazai) in 2002, but was then torn down intentionally for the first time in 2010, after closing that April. It was then built anew, re-opening in April 2013. The newly reconstructed Kabuki-za retains much of its former appearance, especially in terms of the main facade, but is more modernized in terms of its earthquake protection, and accessibility for the handicapped. A modern steel-and-glass skyscraper structure was built directly behind, and attached to, the newly rebuilt Meiji-style theatre, to house the offices of the Shôchiku corporation.

The structure itself is, in its unique way, very typical of Meiji period architecture, incorporating many elements of Western architectural styles, while drawing upon traditional Japanese motifs. The architectural style draws not upon kabuki theatres of the Edo period, built chiefly in wood, but rather upon castle architecture of the Azuchi-Momoyama or Edo periods. The southwest-facing facade resembles two towers, flanking the entrance, which is topped with a wide kara-hafu gable.

Since its reopening in 2013, the new Kabuki-za connects more directly into Higashi-Ginza subway station, with an underground basement lobby filled with souvenir stands, coffee shops, and a convenience store. The floor directly above the theatre includes an art gallery space, café, and other shops, as well as a rooftop Japanese garden allowing close-up views of the traditional-style rooftiles. The office tower soars many stories above these areas which are open to the public.