The story of the 47 Ronin is one of the most celebrated in the history of the samurai. This was perhaps all the more so because it occurred at a time when the samurai class was struggling to maintain a sense of itself - warriors with no war, a social class without a function.

The tale could be said to have begun with the teachings of Yamaga Soko (1622-1685), an influential theorist who wrote a number of important works on the warrior spirit and what it meant to be samurai. His writings inspired a certain Ôishi Kuranosuke Yoshio, a samurai and retainer of Asano Takumi no kami Naganori (1667-1701), who led a branch of the powerful Asano family.

It happened that Lord Asano was chosen by the shogun, Tokugawa Tsunayoshi, to be one of a number of daimyo tasked with entertaining envoys from the Imperial family. To assist him in this new duty, the Bakufu's highest ranking master of protocol, Kira Kozukenosuke Yoshinaka (1641-1702), was assigned to instruct him in matters of etiquette. Kira, it seems, was a somewhat difficult character and expected Asano to compensate him monetarily for the trouble, which Asano held was simply his duty. The two grew to dislike one another intensely, and Kira made every effort to embarrass his student. Finally, on the 14th of the third month of 1701 (April 21 1701), the situation exploded within the shogun's palace - Kira insulted Asano once again, prompting the latter to draw his sword and swing at him. Kira was only wounded in the attack and Asano was promptly placed under confinement.

Striking another man in anger was against the law - doing so within the shogun's palace was unthinkable. Asano made little effort to defend himself during questioning except to say that he bore the shogun no ill will and only regretted that he had failed to kill Kira. After the o-metsuke (inspector-generals) had completed their investigation of the matter, the shogunate passed down a sentence of death on Asano, ordering him to slit his belly at once. The shogun also decreed that his 50,000-koku fief at Akô in [Harima province] was to be confiscated and his brother Daigaku placed under house arrest.

When the news of the unfortunate event reached Asano's castle, his retainers were thrown into an uproar and argued heatedly over what to do next. Some favored accepting their lot quietly and dispersing as ronin, while another group called for a defense of the castle and an actual battle with the government. Ôishi Kuranosuke, who urged the retainers to give up the castle peacefully and struggle to rehabilitate the Asano family while at the same time preparing to take revenge on Kira, sounded the view that prevailed.

Accordingly, a band of Asano retainers - now ronin - set out on a carefully planned road to revenge. Kira was no fool, and expecting some sort of attempt on his life by the Asano men increased his personal guard. Ôishi's scheme was therefore to lull their quarry into complacency, biding their time while they waited for the right moment. To this end the ronin hid away a cache of weapons and armor before ostensibly dispersing, some taking up menial jobs while others, like Ôishi himself, let it seem that they had lost any concern for their futures. Ôishi left his wife and began frequenting all of Edo's houses of ill repute, carousing with prostitutes and engaging in drunken brawls. On one occasion, a samurai from Satsuma is supposed to have come across Ôishi drunk in the street and spat upon him, saying that he was no real samurai. 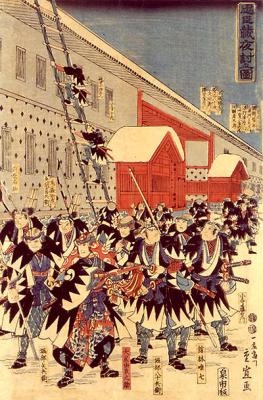 Needless to say, Kira began to doubt that he was in any real danger, and within a year had relaxed his guard. It was at that point that the ronin struck. 47 of them gathered on the 14th of the 12th month 1702 (Jan. 30, 1703) and, after donning the armor and taking up the weapons from the cache, they set out on their revenge on that same snowy night. Once at Kira's Edo mansion, they divided into two groups and attacked, with one group entering through the rear of the compound while the rest forced their way through the front, battering the gate down with a mallet. Kira's men, many of whom were killed or wounded, were taken completely by surprise but did put up a spirited resistance (one of the ronin was wounded in the attack with another being injured after taking a fall), though ultimately to no avail: Kira was found in a cellar of the mansion's kitchen area. While the legend has it that he was presented to Ôishi and offered the chance to commit suicide (with Oishi striking off his head after Kira refused), this is untrue. The Ronin lied to Shogunal inspectors and claimed that they dispatched Kira with a single spear strike, but the turth was revealed in a letter written by one of their number during their subsequent imprisonment. Fuwa Kazuemon wrote that “all the ronin present had stabbed and hacked Kira until he was dead. They sawed off his head…”. Kira's head was wrapped in cloth, hung from an axe pole, and carried to the Sengakuji, where Asano was buried. After Ôishi and the others had given the bloody trophy to the spirit of Asano, they turned themselves in. The assassination of Kira placed the government in a difficult situation. After all, the 46 survivors now awaiting their fate had lived up to the standards of loyalty expected of true samurai and the ideals propounded by such men as Yamaga Soko. Additionally, the decision to order Asano to commit suicide and confiscate his domain while taking no action against Kira had not been popular (at least one of the inspectors at the time had been demoted for protesting the verdict). Nonetheless, the Bakufu decided that the maintenance of order would once again have to prevail, and so the ronin were ordered to commit seppuku - a sentence suggested by the famous Confucian scholar Ogyû Sorai (1666-1728). However, aside from one of their number (Hazama Roku), the Ronin did NOT in fact commit seppuku. Instead, they were beheaded one after another in mock seppuku ceremonies at the Edo mansion of the Hosokawa clan, lords of Kumamoto han. A stone monument stands on that site today.[1] They died on the 4th of the 2nd month of 1703 (March 20, 1703). They were at this time divided up into four groups under guard by four different daimyo, yet once they had all died, their bodies were buried together at the Sengakuji.[2] Legend has it that the Satsuma samurai who had spit upon Ôishi in the street came to the temple and slit his own belly to atone for his insults.

The Revenge of the 47 Ronin continued to spark controversy throughout the Edo Period. One view had it that Ôishi and his men had in fact erred in waiting as long as they had, that in so doing they risked Kira dying (he was, after all, over 60) and their efforts coming to naught. This was, for example, the view of Yamamoto Tsunetomo (author of the famed Hagakure).[3] The Confucian scholar Sato Naotaka (1650-1719) criticized the ronin for taking action at all, as the shogun's decision to order Asano to commit suicide should have ended the matter there and then. He also shared Tsunetomo's belief that the ronin ought to have commited suicide at the Sengakuji once their deed was done. In giving themselves up to be judged, they appeared to have hoped to receive a light sentence and therefore continue living -a shameful objective, given their crimes. At the same time, Naotaka reserved his harshest words for Kira, whom he called a coward and whose precipitation of the whole affair had led to so many deaths.

Other writers did not share those views. Men like Asami Yasuda (1652-1711) defended the actions of the ronin as being appropriate (if not actually challenging the Bakufu's decisions) and Chikamatsu wrote a favorable play (Chushin-gura) that became an instant and timeless classic. In the end, the Ôishi Kuranosuke and his ronin became the stuff of legend, and continue to spawn books, movies, and television shows at a prodigious rate. The Sengakuji is still a popular spot in Tokyo and a place for modern admirers of what many feel were the finest examples of samurai loyalty to emerge from the Edo Period.

This article is a rough draft which is in need of cleanup (grammar, spelling, corrections, links, formatting, etc.). You can help SamuraiWiki by editing it. Click here for a list of articles that have been tagged as a draft copy.
Retrieved from "http://samurai-archives.com/w/index.php?title=The_47_Ronin&oldid=36942"
Categories: