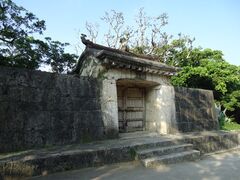 Sonohyan Utaki is a sacred grove of the native Ryukyuan religion located on the grounds of Shuri castle. Traditionally, the king of the Ryûkyû Kingdom would stop and pray at Sonohyan utaki prior to his departing the castle on a journey.

The stone walls and gate to the grove were erected by a stonemason from Taketomi Island named Nishito, in 1519, at the order of King Shô Shin. Destroyed in 1945, it was restored in 1957; restoration and conservation efforts were completed in 1984. This gate is counted as part of the World Heritage Site known officially as "Gusuku Sites and Related Properties of the Kingdom of Ryukyu," and is a nationally-designated Important Cultural Property.