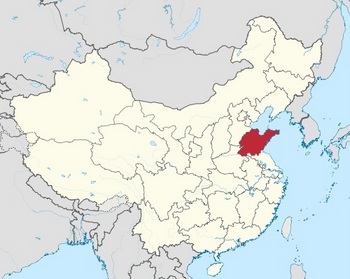 Shandong (in red), within the modern borders of the People's Republic of China.

Shandong is a province in northeastern China, with its capital at Jinan. It is famous as the site of Taishan (Mt. Tai), one of the most sacred sites in Taoism, and as the birthplace of both Confucius and Mencius.

Shandong is also home to the port city of Qingdao (Tsingtao), and the sites of the initial discoveries of the Neolithic Longshan and Dawenkou cultures.[1]

The Red Eyebrows Uprising of 18-27 CE, as well as the Yellow Turbans Rebellion of 184-205 CE (during the Han Dynasty), the Huang Chao rebellion of the Tang Dynasty, the Song Dynasty Bandit-Heroes of the famous story of the Water Margin, and the Boxer Rebellion (c. 1900) of the late Qing Dynasty were all based in Shandong.

Yuan Shikai, who became the first president of the Republic of China in 1912, had previously served as a military governor in Shandong. Following his death in 1916, however, a warlord named Zhang Zongchang ("the Dog Meat General") came to rule in the area.[2]