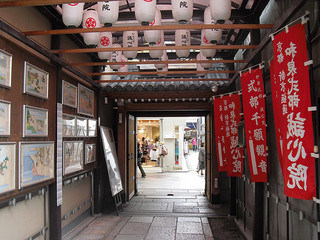 The entrance corridor at Seishin-in, looking out towards the shopping arcade.

Seishin-in is a Buddhist temple in Kyoto, famous for its close associations with Izumi Shikibu, one of the Sanjûrokkasen (36 Immortals of Poetry).

The temple was originally built to the east of the Heian Imperial Palace, one of the first temples to be established there; following a flooding of the Kamo River, however, it was moved west to Ichijô-Ogawa. The temple was then rebuilt at its current location in Shin-Kyôgoku sometime between 1573 and 1591, at the orders of Toyotomi Hideyoshi.

Today, the temple is located within a very modern shopping arcade. The walls of the short entrance hallway are lined with framed reproductions from the Izumi Shikibu emaki.