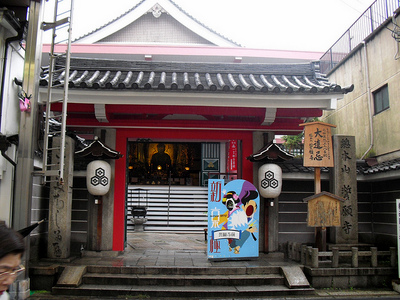 Seigan-ji is a Buddhist temple in central Kyoto. Located within the Shinkyôgyoku covered shopping arcade district, the temple is famous for its large Buddha statue and fan-mound. The temple features in a Noh play by the same name.

The temple was used in 1610 to provide lodgings for King Shô Nei of Ryûkyû and his entourage, when they were on their way from Kagoshima to Sunpu and Edo. In 1634, perhaps because of its proximity to Nijô castle, the temple was used as lodgings for a group of Ryukyuan princes and their entourage, brought by Shimazu Iehisa to pay respects to Tokugawa Iemitsu at that time.[1]