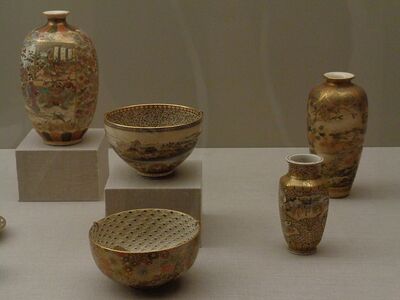 Early Satsuma wares, produced up through the 18th century chiefly for use in tea ceremony, were simple, cream-colored ceramics with a pale, finely-crackled yellow glaze. These, like many other Edo period forms of Japanese pottery, were first developed by Korean potters forcibly brought to Japan as captives during Toyotomi Hideyoshi's invasions of Korea in the 1590s. They can be sub-categorized in several ways, firstly into "white" versus "black" Satsuma wares, and secondly by where they were produced, as each group of kiln sites produced somewhat different styles. Some of the major ones include the Naeshirogawa, Tateno, Ryûmonji, Genryûin (aka Nishimochida), and Hirasa types. Satsuma wares gradually became prized by tea masters, including Furuta Oribe, and daimyô.

Beginning in the Bakumatsu period, Shimazu Nariakira promoted the development of a new form of Satsuma wares, explicitly for foreign markets. He oversaw the opening of a set of kilns at Iso (in Kagoshima city) in 1855, and encouraged potters to develop a style of export art pottery that would appeal to Western buyers.[1] Thus the term "Satsuma wares" came to refer to a new style of works lavishly decorated in gold and polychrome overglazes, with exceptionally detailed multi-color images of figures or scenes. After a number of these works were displayed at Satsuma's pavilion at the 1867 Paris World's Fair, Satsuma wares became all the more popular among Western buyers, and eventually came to be produced not only in Kagoshima prefecture, but also in Kyoto, Osaka, Yokohama, and Tokyo as well, though they continued to be called "Satsuma" wares.