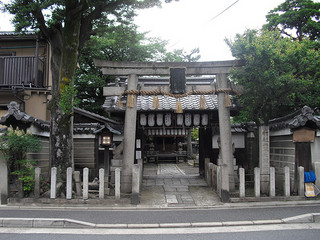 Reikôden Tenmangû is a Shinto shrine in Kyoto enshrining both Sugawara no Michizane (aka Tenjin, god of calligraphy and scholarship) and Tokugawa Ieyasu, first shogun of the Tokugawa shogunate. The shrine was first established in 1018 in Kawachi province, by a sixth-generation descendant of Michizane. At the time of the Mongol invasions in 1274 & 1281, Emperor Go-Uda prayed here for their defeat.

The shrine lost its territory during the Ônin War (1467-1477) which ravaged Kyoto, and so it was moved to within the grounds of the temple of Tôji.

Tokugawa Ieyasu revered the shrine, praying here, and working to help revive the family of priests associated with the shrine. In 1636, after his death, he came to be enshrined here (as well as at countless other locations). The shrine returned to this site in 1761, and new shrine buildings were built, after the family of shrine priests associated with the shrine was revived. The current buildings are those moved here in 1872 from a Konoe family private shrine.