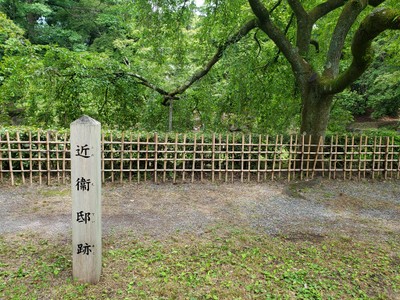 The Konoe family was one of the gosekke, the five top kuge (court aristocrat) families. Many sesshô, kanpaku and dajô daijin across the centuries were members of this family.

The family takes its name from the position of Imperial Guard (Konoe).

A wealthy and influential family, the Konoe provided protection and various forms of assistance to a variety of parties on occasion, and intermarried with Imperial, shogunal, and daimyô families. During the Muromachi period, the guild of gold leaf producers in Kyoto enjoyed Konoe protection. Konoe Nobutada (1565-1614) was adopted into the Imperial family as heir, though he never took the throne; Konoe Motohiro (1648-1722), head of the family during his lifetime, married an Imperial princess, Shinanomiya Tsuneko, and his daughter Konoe Hiroko married Shogun Tokugawa Ienobu. In 1661, it was the Konoe who granted the monk Ingen land on which to establish Manpuku-ji, thus introducing Ôbaku Zen to Japan.[1]

A few centuries later, Konoe Tadahiro adopted Atsu-hime, a daughter of the Shimazu clan, and both Konoe and Shimazu benefited from the relationship between their families in their efforts to retain wealth and power through the chaos surrounding the Meiji Restoration.

The Konoe family mansion burned down on 1675/11/25, but five household managers braved the flames to secure a number of family treasures and archival documents; in part due to their efforts, roughly 200,000 documents survive today in the family archive in Kyoto, which is known as the Yômei bunko.[2]

Selected Members of the Konoe family