Promulgation of the Meiji Constitution

The promulgation of the Meiji Constitution on February 11, 1889, was accompanied by a series of official ceremonies which have been described as "Japan's first modern national ceremony," setting standards and precedents for national ceremonies from that time forward, particularly those held up until the end of World War II.

The events were held on kigensetsu, or National Foundation Day, the supposed anniversary of Emperor Jimmu's accession to the throne in 660 BCE, thus establishing that national holiday as being from then on also the anniversary of the promulgation of the Constitution, and thus in a sense the anniversary of the establishment of the modern Japanese nation-state. They were advertised ahead of time, and information was given to the newspapers to share with the public details of the schedule of events, and the layout of the Throne Room for the main ceremony. 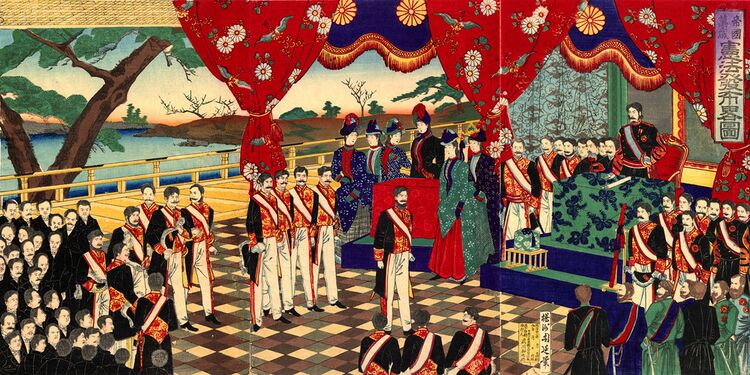 An ukiyo-e woodblock print triptych by Toyohara Chikanobu depicting the promulgation ceremony which took place in the Throne Room.

While it is the more modern-style, secular national ceremony which is most familiar and associated with the Promulgation of the Constitution, and most widely reproduced in ukiyo-e prints and newspaper images from the time, the ceremonies associated with the promulgation were intimately intertwined with State Shinto and Emperor-centered ritual, and began with a set of very private rites performed by the Emperor alone and invented to evoke the idea of a continuation of ancient Imperial tradition. These rites began at the kashiko dokoro (賢所) in the innermost sanctuaries of the Tokyo Imperial Palace, where the Meiji Emperor, dressed in ceremonial robes of a classical style, made an offering of a sacred sprig. He also made a vow to Amaterasu, to uphold the foundational laws of the new State, and to maintain the Imperial institution and lineage. After repeating these oaths to his imperial ancestors at the kôreiden, he paid worship to a variety of kami enshrined at the palace's shinden.

The Emperor then changed into modern ceremonial military uniform, and made his way to the new Throne Room, patterned after a European hall in its furnishing, design, and ornamentation. There, in a ceremony widely reproduced in vividly colored ukiyo-e prints, the Emperor read out a formal Imperial Speech on the Promulgation of the Constitution, and handed a copy of the Constitution itself to Prime Minister Kuroda Kiyotaka, symbolizing or performing the idea that the Constitution was being bestowed upon the people as a gift of Imperial benevolence. As the Emperor did so, he was flanked by two of the Imperial Regalia[1] and surrounded by Imperial Princes, Princesses, the Empress, and other members of the Imperial family. Members of the newly-formed European-style Japanese peerage (aristocracy), the chief ministers of government, governors of the various prefectures of Japan and heads of the prefectural assemblies (legislatures) represented the people of the nation, and stood before the emperor, ceremonially receiving the Constitution from the Emperor, on behalf of the people. A number of foreign diplomats, along with reporters for ten Tokyo-based newspapers, five provincial Japanese newspapers, and three English-language papers, stood to one side, observing but not participating in the ceremony.

In the meantime, Imperial messengers reported the news of the constitutional promulgation to the gods at Ise Shrine, and to Imperial ancestors and the spirits of national heroes at Yasukuni Shrine and at the graves of Emperor Jimmu, Emperor Kômei, Iwakura Tomomi, Kido Takayoshi, and Ôkubo Toshimichi. Similar reports were also made by the governors of each prefecture at kankoku heisha (central government Shinto shrines) throughout the realm.

Following the private Imperial rites conducted deep within the Palace, and the Throne Room ceremony restricted to nobles, officials, and reporters, a third stage of the day's events brought the Emperor and the celebration out into the city, where it was visible and accessible to the broader public. A stately procession emerged from the palace's Main Gate (seimon), crossing over Nijûbashi and through the main palace plaza, and made its way through some of the city's newly-built grand thoroughfares, to arrive at the Aoyama Military Parade Field as its final destination. They were met, or witnessed, by five thousand schoolchildren and university students, chosen and arranged by the Ministry of Education in the palace plaza and along the sides of the streets. In accordance with specific instructions given to them for their participation in welcoming the parade, university students shouted "Banzai!"[2] while students from the Upper Girls' School sang a kigensetsu song, and elementary school students chanted Kimi ga yo.

The Imperial "stage ceremonial cortege" (kokugishiki robo) was arranged with the Emperor at the center, preceded by members of the Imperial family and officials of the Imperial Household Ministry; the emperor was followed by the top ministers of state, in a manner which represented the legal division of Constitutional Government and Imperial Household,[3] and a pattern of diminishing power as one was placed farther from the Emperor. The Emperor and Empress were visible within an English-style horse-drawn carriage, decorated with chrysanthemum crests, and topped by a golden phoenix ornament like that which would have topped the Imperial palanquin in earlier times.

The procession took about two hours to get from the palace to the Aoyama Military Parade Field, where it was met by second- and third-ranking officials (chokunin and sônin, respectively), prefectural assembly chairmen, foreign diplomats, and other invited dignitaries, all of whom sat under tents, on grandstands erected on the northern end of the field. Eleven thousand soldiers and sailors of the Imperial Japanese Army and Navy were also gathered on the field, and were formally reviewed or inspected by the Emperor, who rode up and down their ranks on horseback. Following a ceremonial march by these soldiers and sailors, led by the Imperial Guard and Tokyo Garrison, the cortege returned to the palace for a formal banquet.

On the following day, February 12, 1889, the Imperial cortege made its way through the city once again, in response to a request by the governor of Tokyo, who expressed the great popular demand for such a procession. The cortege took a different route this time, however, departing the palace via the Sakuradamon as the previous day, but then turning to cross Shinbashi, parading to Ueno Park past numerous signs, lanterns, banners, national flags, and ceremonial arches erected by corporations and popular organizations. Popular celebrations of various sorts, including parade floats and massive decorative arches featuring nationalist slogans and lit by electric lights, continued for some time, while the Emperor returned to the palace.