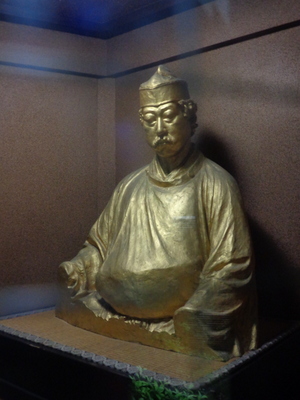 A bust of Okakura, at Okakura Tenshin Memorial Park, in Tokyo's Yanaka district

Okakura Kakuzô was an art historian, painter and intellectual who played a significant role in introducing Japanese culture, and specifically Japanese art, to the United States, as well as in establishing a canon of Japanese art. He was also a prominent advocate for traditional Japanese art and culture, and a proponent of caution against Westernizing too quickly or too completely.

Perhaps best known as the author of The Ideals of the East and The Book of Tea, Okakura was the founder and first director of Nihon Bijutsuin (Japan Fine Arts Academy), and the first head of the Oriental art department at the Museum of Fine Arts, Boston.

Kakuzô was the son of Okakura Kan'emon, a wealthy silk merchant from Fukui prefecture. Educated chiefly in English-language schools in Yokohama, where he was brought up, he would later attend Tokyo Imperial University, where many of his teachers and mentors, Ernest Fenollosa chief among them, were Westerners. Okakura and Fenollosa would maintain a close relationship for many years. In university, Okakura focused in his studies upon politics, and other subjects which might lead him to a successful career as a government official, in accordance with his father's desires; he pursued studies of art as a hobby, on the side.

Upon graduation, he was made the head of the music division of the Ministry of Education, but he did not remain long in this position. In 1886, he accompanied Fenollosa to the US and a number of major cities in Europe, on a one-year art tour. Alongside Fenollosa, Okakura was an important supporter of the work of artists such as Kanô Hôgai and Yokoyama Taikan, and the Nihonga movement more generally. In helping to select objects to purchase or otherwise obtain for the Boston collection, he and Fenollosa played a major role in establishing what remains the core of the Japanese art historical canon today.

Returning to Japan, in 1888 he helped found the Tokyo Bijutsu Gakkô; he later became president of the school in 1890, when Fenollosa returned to the US, but Okakura was forced to leave amid scandal in 1897, following a dispute with the Ministry of Education. He then established his own academy, the Nihon Bijutsuin (Japan Fine Arts Academy) along with a number of his followers and colleagues.

The following year, Yokoyama Taikan painted and exhibited a work entitled Kutsugen, today in the collection of Itsukushima Shrine, which depicts the Chinese poet Qu Yuan (act. 3rd c. BCE) as a symbol or metaphor for Okakura's situation. By 1906, Okakura and those students who remained loyal to him were forced by their meager financial situation to leave Tokyo and to establish themselves in the rural fishing village of Izura, in Ibaraki prefecture. Despite this serious setback and defeat, Okakura continued to be seen as a leader of the nihonga movement, a torch which would be picked up and carried by various of his students and followers after his death in 1913.

In the last decade of his life, Okakura became a fixture in the art world and upper class circles of Boston society, developing a particularly close relationship with Isabella Stewart Gardner. While serving as head of the Asiatic Art section at the Museum of Fine Arts, he frequently led tea ceremonies at the Gardner house, Fenway Court, and later gave his tea set to Mrs. Gardner as a gift.

Though he himself painted a number of compositions, his contributions as an intellectual and art critic were far more significant. He wrote and published a number of very influential books on the essence of Asianness and Japaneseness and on Japanese culture and art, and attended the 1904 St. Louis Louisiana Purchase Exposition (World's Fair), where he gave talks and distributed pamphlets. He was a strong advocate for the idea that only Asians could fully and properly understand and appreciate Asian culture, and believed strongly in an inherent Japanese cultural superiority. At a time when Westerners continued to espouse Orientalist attitudes about Western superiority, seeing the East as primitive and backwards, and when Japan eagerly adopted a myriad of aspects of Western culture, associating it with modernity and their own traditional culture with the primitive and the backwards, Okakura advanced the idea of the East as the home of a more spiritual, culturally superior civilization, the West as representative of modern decadence and materialism. His three most famous books, Ideals of the East, The Book of Tea, and The Awakening of Japan, were written and published originally in English, for a Western audience.

Through his writings, talks, and other activities, he established a reputation for himself as one of the chief experts on Asian art and culture. Though he is known to have worn Western-style formal suits in Japan, he made a point of always appearing in public in the West in Japanese kimono. Though most Japanese at this time saw Western clothing as elements of a modern society, and kimono as backwards and provincial, in the eyes of Americans, Okakura's kimono lent him a greater air of authenticity. Dressed in kimono, he was seen by Americans as more in touch with his own culture, and someone who could more rightly be seen as an authority on it.

He also hired Tomita Kôjirô, one of his students, to aid in translation and research efforts at the Boston Museum. Tomita would go on to become curator in 1931.

Okakura died in 1913, and was succeeded as head of the department by John Ellerton Lodge.