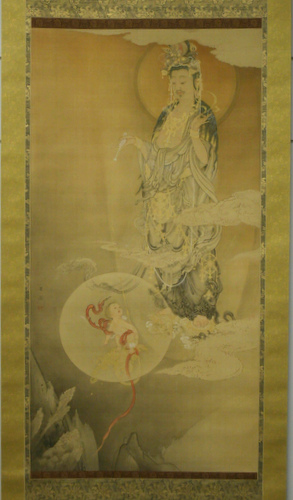 Kanô Hôgai was the last great master of the Kanô school of painting, and a pioneer of the Nihonga (neo-traditional painting) style, or movement, in the early Meiji period.

Hôgai was born in Innai, Chôfu han, in what is today the city of Shimonoseki. He was the eldest son of domain court painter (goyô eshi) Kanô Seikô. His childhood name was Kôtarô, though he also came to be known by a number of other names, including Enshin, Shôrin, and Kôrin. He studied painting originally under his father, and practiced Zen meditation under Rinryû-oshô, abbot of his family's family temple, Kakuen-ji; the abbot, and his meditation practice, are said to have had a great influence on Hôgai. In fact, it was from Rinryû-oshô that the artist received the name Hôgai. Though Hôgai's name is written with characters literally meaning, roughly, "fragrant cliff," it is a homophone for hôgai, meaning "outside of the Law," making reference to a teaching, that "the culmination of Zen is to enter the Law [or, the Dharma], and to leave it."

In 1846, Hôgai traveled to Edo, where he entered the tutelage of Kanô Osanobu (aka Seisen'in), head of the Kobiki-chô Kanô school. Osanobu passed away shortly afterward, and Hôgai began to study under Kanô Shôsen'in Tadanobu. It was at this time that he met Hashimoto Gahô, a fellow student with whom Hôgai would remain close lifelong friends. Gahô, like Hôgai, would go on to play a key role in pioneering Nihonga painting.

Hôgai became head of the studio around 1850. He received the honor of using a character of his master's name around 1849, taking on the name Shôkai, and received the honor over again around 1852, taking on the name Tadamichi and becoming an independent Kanô artist in his own right (i.e. no longer a student, or apprentice, under a master). He then became a court painter for the lord of Chôfu han, as his father had been before him.

When Edo castle was rebuilt in 1860, Hôgai was commissioned to create a ceiling painting for the Ôhiroma (main audience hall). As the various national affairs of the Bakumatsu period ramped up, Hôgai then came to paint maps of the Kanmon Straits, among other works, for the Tokugawa shogunate.

With the Meiji Restoration, he lost his positions working for the shogunate, and for the domain, both of which ceased to exist in the new order. From 1877, he began to do preparatory drawings for export ceramics, and was employed by the Shimazu clan on at least one occasion, in 1879.

Hôgai attracted the attention of American art enthusiast Ernest Fenollosa in 1882, and in 1884 joined Fenollosa's Kangakai (Painting Appreciation Society). In the Kangakai's first painting competition the following year, Hôgai's painting of "diving dragon and arhats" (fukuryû rakan zu) won third prize, and in the 2nd annual competition in 1886, his Niô painting (today in a private collection) won first prize. Quickly becoming one of the most central artists in the Society (if not the most central), Hôgai, with Fenollosa's guidance and input, led the way in the modernization of Japanese painting, and the creation and development of the new form known as "Nihonga" (lit. Japanese painting). Many in the art world in Japan at that time, looking at Western examples, felt strongly that Japan needed to develop a national style of art; while many saw the adoption of Western modes, styles, and materials (i.e. esp. realism in oils on canvas) as the way to bring Japanese art into the modern era, Fenollosa and Hôgai pushed for the incorporation of "modern" elements - e.g. Western perspective, elements of realism, shading of colors, and use of light and shadow - into traditional modes of painting, in traditional media (e.g. ink and mineral pigments on paper or silk).

Combining elements of the Kanô tradition, Muromachi period ink painting, and painting of the Ming and Qing Dynasties with these various Western elements, Hôgai and Fenollosa, along with Hashimoto Gahô, Yokoyama Taikan, and a handful of other artists, pioneered the Nihonga movement, keeping Japanese traditional painting alive by adapting it for the new era. Some of Hôgai's key works from this period, the last years of his life, include paintings of Fudô Myôô, one of rocks, and one of a landscape with dawn mist, all today owned by the Tokyo University of the Arts. Perhaps his most famous work is a hanging scroll painting of the bodhisattva Kannon as Compassionate Mother (Hibo Kannon), which was exhibited at the Paris Salon in 1883; Fenollosa purchased the painting that year, later selling it to Charles Lang Freer in 1902. While this original remains today in the collection of the Freer Gallery of Art at the Smithsonian Institution, Hôgai later painted a second version, with some slight alterations, which is today in the collection of the Tokyo University of the Arts, and which has been designated an Important Cultural Property. The work, representative of early Meiji period Nihonga, is in ink, mineral colors, and gold on silk, and depicts a traditional subject, Kannon, albeit in a somewhat untraditional mode, this role or identity as "compassionate mother," possibly borrowing hints from the Western tradition of paintings of the Virgin Mary; the painting also incorporates a degree of realism in the depiction of the faces and bodies of both Kannon and an infant standing on a cloud below, along with shading and some treatment of light and shadow.

As a result of the efforts of Fenollosa, as well as William Sturgis Bigelow and others, by the end of the Meiji period, a number of Hôgai's works were already in the collections of the Museum of Fine Arts, Boston, Philadelphia Museum of Art, and the Freer Gallery.

In his final years, while producing these works, Hôgai also worked judging and examining artworks, and was hired by the Tokyo School of Fine Arts in 1888; he attempted to open his own school of art as well, but three months before its planned opening, on November 5, 1888, he passed away suddenly, at the age of 61.