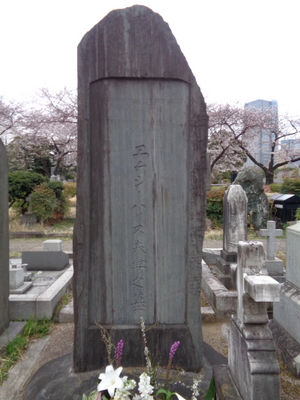 Grave of Merriman Harris and his wife Flora Best (d. 1909) at the Aoyama Cemetery in Tokyo

Merriman Colbert Harris was born in Bealesville, Ohio, July 9, 1846. He was educated in public school, and at the age of seventeen in 1863 enlisted in the Twelfth Ohio Cavalry, and was discharged in November, 1865, at the close of the American civil war.

After the war he attended school at Rural Seminary and Washington Academy, and afterward taught school for two years. He joined the Pittsburg Conference of the Methodist Episcopal Church and was ordained a minister in 1871 in Steubenville, Ohio, by Bishop Clarke. After this he spent three years at Allegheny College, arid in 1873 was graduated B. A., having completed the classical and Biblical courses of that institution.

In March, 1873, he was appointed a missionary of the Methodist Episcopal Church to Japan. In October of the same year he was married to Flora L. Best, of Meadville, Pa., and left immediately for Japan, accompanied by his wife, arriving in Yokohama December 14th. They disembarked and remained there for a few weeks, and then removed to Hakodate, being the first missionaries to North Japan. He lived five years in Hakodate, and there began the study of the languages and civilization of Japan. He was appointed Vice-Consul of the United States in 1874, and assisted the American Consul in his duties until the death of the latter in 1875, when he became Acting Consul, and remained in charge until the closing of the Consulate in 1878.

In the year 1878 he was transferred to Tokyo, Japan, where he resided until 1886. During this time he traveled over north and central Japan, preached, lectured in all the principal cities, organized churches and laid the foundation for many Christian societies. He was a charter member of the Methodist Episcopal Mission, which was organized on his birthday, July 9, 1873, m Yokohama, and one of the original members of the Japan Conference, effected in July, 1884, in Tokyo.

On account of the illness of his wife he returned to San Francisco in 1886, and was appointed superintendent of the Japanese mission, where he has lived and labored until the present. The mission in an Francisco has prospered and spread over the Pacific Coast and Hawaii, and is now organized as the Pacific-Japanese Mission, with sixteen churches and 1,100 members and many adherents.

In 1898 he visited Japan to attend the twenty-fifth anniversary of the Methodist Episcopal Mission. During this visit the emperor conferred on him the Order of the Sacred Treasure, Fourth Class. In 1901 he also revisited Japan and spent three months on a preaching tour in connection with Forward Movement of the Christian Churches. He traveled the length of Japan, and was cordially received by all classes. On the occasion of the fifteen anniversary of his work for the Japanese on the Pacific Coast a testimonial to him and Mrs. Harris was given by Japanese of all classes, at which time a gift of a beautiful Geneva watch and $1,000 were tendered to him.