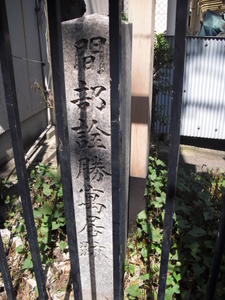 A stone marker stands on the former site of Myômanji, a temple in Kyoto's Teramachi, where Akikatsu stayed during his time in Kyoto in 1858-1859.

Manabe Akikatsu was a daimyô of Sabae han in Echizen province, and served for a time as Kyoto shoshidai, Osaka jôdai (steward of Osaka castle), and as rôjû. He is particularly known for his involvement in the Ansei Purge, and in obtaining Imperial approval for the Five-Power Treaties[2] of the Ansei era.

The third son of Manabe Akihiro, he was adopted by his older brother Manabe Akisane and became the 7th lord of Sabae domain at age 11. He served the shogunate in a number of positions, including Jisha Bugyô (Magistrate of Temples and Shrines), Steward of Osaka Castle, and Kyoto Shoshidai, before being appointed rôjû, one of the chief councilors of the shogunate, in 1840.[3]

He was forced to retire from that position three years later[3], however, due to disagreements with Mizuno Tadakuni.

He was restored to his position as rôjû by Ii Naosuke on 1858/6/23 following the dismissal of several rôjû in the wake of the signing of the Harris Treaty.[4] He then handled a variety of difficult situations, including the Ansei Purges, the Five-Power Treaties, a shogunal succession dispute[5], and suppression of sonnô jôi rebels in Kyoto. The following year, however, Akikatsu was forced into retirement once again after falling from Naosuke's favor.[3]