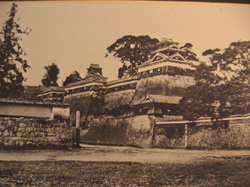 Kumamoto castle is located in Kumamoto city in modern day Kumamoto Prefecture (formerly Higo province) and was built sometime between 1601 and 1607 (although there is speculation that construction began before 1600) under the direction of Kato Kiyomasa. Prior to Kiyomasa, the site had been home to a rudimentary structure since the middle of the 16th century and had been given to Sassa Narimasa in 1587. Before that, it had been the headquarters of families such as the Izuta, Kanokogi, and Jo.

Kato remembered well the lessons he had learned while defending fortresses against the Chinese and Koreans during the Korean Invasions of the 1590’s. In particular, he placed an emphasis on the castle having a self-sustaining food supply by planting fruit and nut trees on the premises and filling tatami mats with these foodstuffs. The castle stretched about a mile east to west and 2 ¼ miles north to south. The outer moat had a circumference of 5 ½ miles. It boasted 49 turrets and 47 gates in its original form. The tenshu was five outside stories (with six inner floors) tall with three eaves and a basement. A smaller secondary tenshu had four outside stories (five inner floors) and two eaves. Both were plastered with mud, covered with wood, and painted black. The large Udo Yagura, which was considered a third tenshu, has five stories, a basement, and three eaves. The main part of the castle was built on Chausu-yama slightly inland form the Ariake Sea. The honmaru was divided into many compounds such as the Higashinomaru (East Compound), Takenomaru (Bamboo Compound), Iida Maru (named after Kato’s vassal iida Kakubei), and Sukiya Maru (Teahouse Compound). This complex was entered from the Nishide Maru (West Compound) which in turn led to the ninomaru and sannomaru. The ishigaki at Kumamoto are some of the most impressive in Japan, featuring ‘open fan’ highly curved corners.

The Kato were ousted from Kumamoto by the Tokugawa Shogunate in 1632 when Kiyomasa’s son Tadahiro fell into disfavor and was exiled to northern Honshu. The castle was given to Hosokawa Tadaoki, who passed it on to his son Tadatoshi. The Hosokawa remained in charge of the castle through the Meiji Restoration. The structure was then spared from destruction as the new government planned to use it as an army camp. The castle was put to the test during the Satsuma Rebellion in 1877. Saigo Takamori, who had resigned his position as commander of the Imperial Guard in Tokyo in 1873 when his plan to invade Korea was rejected by the Emperor, led a group of discontented former samurai who now found themselves on the outside looking in. Saigo had difficulty in controlling his followers, and to appease them agreed to lead them to Tokyo once again to restate their demands. He was declared a rebel on February 20, 1877 and his march to Tokyo found itself stopped cold when he and his 15,000 man army attempted to oust the Imperial garrison in Kumamoto castle on February 22. For 52 days Saigo’s army laid siege to the castle. While they were able to destroy many of the castle’s buildings (such as the two main tenshu), they were unable to take the castle. Government troops managed to convince the local residents to remain loyal to the Emperor and not render aid to Saigo, and on April 15 the siege was lifted. Saigo’s army retreated to Kagoshima and was eventually eliminated by Imperial troops. Ironically, the castle built by one of the more famous samurai commanders was used by the government to defeat the last of the samurai.

The castle continued to be used as a garrison for many years. In 1960, a concrete replica of the two destroyed tenshu was built. Since the original walls would not hold their weight (about 6500 tons), the new structures were built on 6 ½ foot piles driven 144 feet into the ground (eight piles for the main tenshu, four for the secondary). The pilings suspend the castle about a foot above the walls, giving the impression of the castle floating above them. The original castle well still exists within the base, as does a set of steps that at one time led to the first floor. In addition, ten towers (including the Udo Yagura), a gateway, and a parapet survive from the original structure. The most important of the surviving structures is the Udo Yagura, the so-called ‘third tenshu’. It has three outside stories (with five inner levels and a basement). The roofs are uncommon as they follow straight lines, rather than being curved as in most other castles (including the rebuilt Kumamoto first and second tenshu). The railing around the top balcony here is painted in red lacquer. The timbers inside the structure pre-date Kiyomasa’s construction and were probably part of the earlier structure from the 16th century (there is speculation that they had been part of Udo castle, but there is no hard evidence to that effect). The rest of the surviving buildings are from the late Edo Period. Many reconstructed buildings have been added in recent years as the castle prepares for the 400th anniversary in 2007. The inner daimyo's palace is scheduled to be completed for the celebration.

The castle suffered considerable damage in a series of earthquakes in April 2016, but extensive repair efforts were quickly undertaken.

Kumamoto is one of the most popular castles for location shooting in Japan. It can be seen in Aka Kage (Red Shadow), Kagemusha, Ran, and many other samurai films. The former castle grounds are also home to the Kumamoto Prefectural Museum of Art, established in 1976. The Museum has a secondary building dedicated to the Eisei Bunko (Hosokawa clan) collections, and a museum branch in Chibajô-machi, the neighborhood just east of the castle.[1]