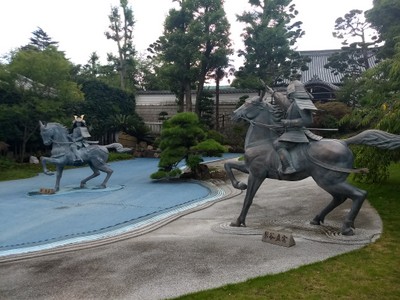 Kumagai no Jirô Naozane was a warrior who fought for the Minamoto clan in the Genpei War of 1180-1185. He is most known for killing the young Taira no Atsumori, an episode romantically told in the Tale of the Heike; a number of Noh, kabuki, and puppet plays based on this incident feature Naozane, including the Noh play Atsumori and the Kabuki & ningyô jôruri play Kumagai Jinya ("Kumagai's Battle Camp").

During the battle of Ichi-no-tani, according to the Tale of the Heike, Naozane found himself on the beach, seeking a high-ranking opponent to fight. Spotting a warrior splashing into the sea on horseback, heading to a boat off in the distance, he calls out to the warrior, saying it is dishonorable to turn one's back on one's enemies, and calling him back. Atsumori comes back, and is tackled off his horse, and to the ground, by Naozane, who pulls off his helmet and sees Atsumori's powdered white face and blackened teeth - marks of courtly refinement. He means to take the young man's head, but hesitates, thinking Atsumori just the same age as his own son, Kumagai Kojirô Naoie. Naozane asks the young man his name, and Atsumori spits back, "who are you?" Kumagai gives his name, but Atsumori does not, saying simply that he is a worthy prize, and that if Kumagai takes his head, others will recognize him. With other Minamoto warriors around, Kumagai tells Atsumori that he has no choice, that he cannot let him go, and that this way, if he kills him, at least he will say memorial prayers for him; Atsumori replies, "Just take my head and be quick about it,"[1], and Kumagai does so.

After taking Atsumori's head, Kumagai is distraught at having to kill such a young, beautiful, and refined young man, who reminds him so of his own son. Still, he goes through Atsumori's belongings, finding a flute and realizing it was probably Atsumori who he heard playing beautiful music the previous night; further impressed and awed by Atsumori's refinement (and that of the Taira more generally, in contrast to the more purely battle-oriented Minamoto), he and all those he shows the head to shed tears.

The "Death of Atsumori" chapter of the Heike ends with Kumagai thinking "increasingly of becoming a monk."[2] It is unclear whether, historically, he truly did so, but he is believed to have survived the Genpei War, and to have lived to a good old age, dying in 1208 at the age of 67. In the Noh play Atsumori, Naozane, having become the monk Renshô, returns to Suma Shore, where the battle took place, and meets with the ghost of Atsumori; the ghost reenacts the circumstances of their previous meeting, but Renshô refuses to play his role in re-enacting Atsumori's death. He instead prays for the spirit's release.

In the kabuki and puppet play Kumagai jinya, Kumagai cannot bring himself to kill Atsumori, but then kills his own son in order to fulfill his feudal obligations to his lord, Minamoto no Yoritomo, resulting in much tragic drama.