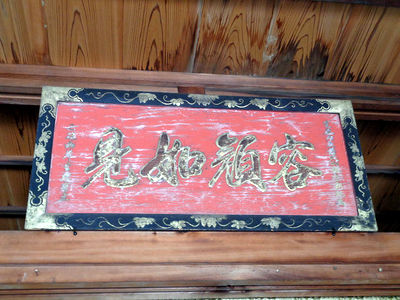 Komatsu-dera is a small Rinzai Zen Buddhist temple of the Myôshin-ji branch of Rinzai, located in the Inland Sea port town of Tomonoura, in Kure City, Hiroshima prefecture. The temple, which traces its origins to the 12th century, is notable for its connections to the Ryukyuan embassies to Edo.

The temple is said to have its origins in the establishment in 1175 by Taira no Shigemori of a small worship hall for a statue of Amida. Shigemori stopped in Tomonoura on his way to Itsukushima Shrine, and erected the structure, also planting a pine tree in commemoration of the event. The temple takes its name either from this "small pine" (J: komatsu), or from Shigemori's honorific title, Komatsu daifu. The pine, incidentally, continued to live and grow at the temple for nearly 780 years, before being felled in a typhoon in 1954.

Ashikaga Takauji stayed at Komatsu-dera for a time in 1335, alongside his younger brother Ashikaga Naoyoshi, while journeying to the Kantô from his Kyushu campaign. Less than five years later, the temple became an encampment for forces of the Northern Court, during a 10+ day battle against Southern Court forces, based at Ôgashima castle, fighting for control of Tomo; ultimately, the Northern court won back control of the town.

Shogun Ashikaga Yoshiaki stayed at Komatsu-dera for a time as well, beginning in 1575, after being forced to flee Kyoto in 1573. While there, he met with Toyotomi Hideyoshi for peace negotiations.

Mizuno Katsunari later had a Gion Shrine built on the temple grounds.

The temple was rebuilt in 1623 by Zen master Takuun, third abbot of Bairin-ji in Kurume, and it is this building which still stands. The grounds were divided in 1685, and the extent of the temple's territory as it remains today dates back to that event.

The grounds include a small Yakushi Jizô hall in which worshippers can offer prayers to stave off baldness to a statue of a haired Yakushi Jizô (a figure normally depicted as bald, or with a shaved head). Also within the grounds is a grave marker for Shô Dôkyô, a Ryukyuan musician who died in Tomonoura in 1790 while on the way to Edo. Though his body has been reburied in Okinawa, the historical tombstone remains. A calligraphic plaque donated to the temple in his memory by his father and grandfather in 1796 still hangs within the main hall; another plaque hanging in the hall bears the calligraphy of a man named Wu Taihe, but little is known about this figure.