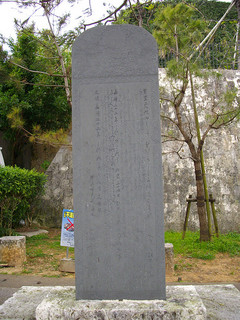 A reconstruction of the 1543 kokuô shôtoku-hi, which stands outside Shuri castle today

The kokuô shôtoku-hi (lit. "stele of poem of the king's virtue") is the name of two different stelae erected in the early 16th century on the outskirts of Shuri castle, the royal palace of the Ryûkyû Kingdom.

The first was erected in 1522 along with another stele, the Madama minato himon, just inside the Shureimon main gate of castle. The inscription upon it, written chiefly in classical Chinese, praises King Shô Shin and speaks of a number of his accomplishments and includes a section which reads, in part:

"Stele erected on the occasion of the dispatch from Miyako of a sword named 'Chiganemaru' and sacred beads during the reign of King Shô Shin."[1]

The stele is believed to have been erected in commemoration of that occasion. Other elements of the inscription include a proscription against self-immolation or "loyal suicide" otherwise following the king's death. A reproduction of this stele stands today on its historical location, just inside the Shureimon, alongside a replica of the Madama minato himon stele.

A second stele by the same name was erected in 1543. It bears an inscription by Sengan, sixth abbot of Engaku-ji, which praises King Shô Sei, who had the road paved running from the shrine at Bengadake, the highest point in Naha, to Shuri castle, and had pine trees planted all along its length. The inscription on one side of the stele is written in classical Chinese, and that on the other side in a combination of kanji and kana.

The open area around the stele came to be known as Himun-nu-mo ("Hair of the Stele Inscription"), and beginning in 1935 it came to be the terminal of the Naha-Shuri bus line. The stele was destroyed in the 1945 Battle of Okinawa; a reconstruction based on surviving portions of the original, and on other surviving stelae, stands outside the Wii-nu-mô 上の毛 area at the northwest corner of the castle compound today. 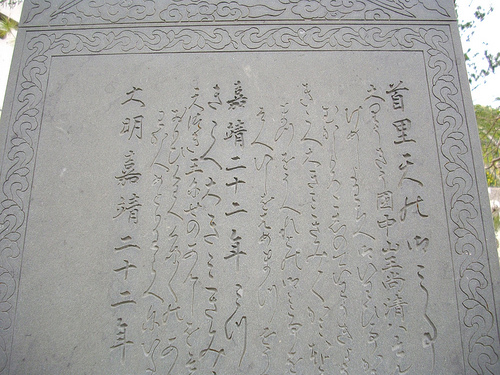