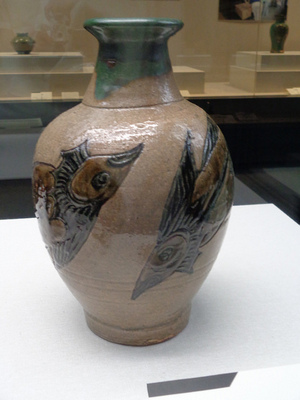 A vase by Kinjô on display at the Okinawa Prefectural Museum. Kinjô was particularly fond of fish motifs.

Kinjô Jirô was an Okinawan pottery artist, the first Okinawan in any art to be officially recognized by the Japanese national government as a Living National Treasure.

Kinjô first began learning pottery at age 13, studying under Aragaki Eitoku of the Aragaki kilns in Tsuboya, the historical center of Okinawan pottery. Receiving influence from Yanagi Sôetsu and Hamada Shôji, he decided to devote his life to pottery.

He was designated a Living National Treasure in 1985.