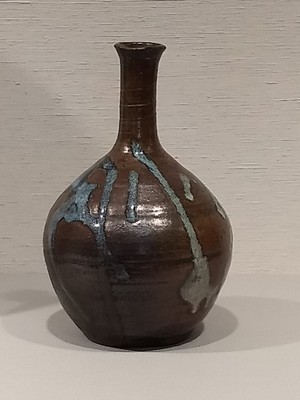 Hamada Shôji was a notable ceramics artist of the 20th century. One of the first potters to be designated a Living National Treasure by the Japanese government,[1] he was prominent in the mingei ("folk crafts") movement of the prewar era.

Hamada began his study of ceramics in Kyoto. In 1938, he accompanied Yanagi Sôetsu, Kawai Kanjirô, and a number of other mingei figures on a three-week trip to Okinawa, marking the beginning of his engagement with Ryukyuan pottery. At one time, he spent some time in Cornwall, England, with potter Bernard Leach, with whom he'd developed a close friendship.[2]

Hamada later became known for his work in the style of Mashiko wares, a pottery style native to Tochigi prefecture.