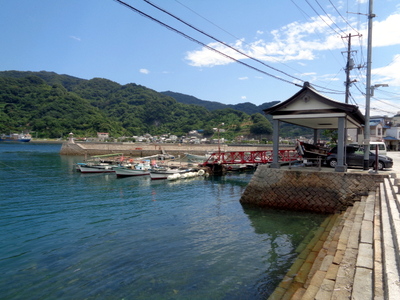 Kamagari was a major Inland Sea port in Aki province, on the westernmost of a short string of islands including Shimo- and Kami-Kamagari Islands, Teshima, and Ôsaki-Shimojima. Today known as Shimo-Kamagari, and administered as part of Kure City, it is located just south of the mainland of Kure City. Dutch, Korean, and Ryukyuan missions to Edo, as well as daimyô traveling on sankin kôtai and other officials and elites regularly stopped at Kamagari. It was an officially designated kaieki (maritime post-station).

As at many other port towns in the area, rather than having wooden wharfs extending out over the water, the most central part of Kamagari's harbor was lined with stone steps known as gangi (雁木). Boats would come right up to these steps, and thus directly into the town. Different sections of the steps were reserved for the use of different elite groups - members of Korean missions, and their Tsushima han escorts, would tie up their boats in one spot, while the lord of Hiroshima han would use a different section of the steps, some meters away.

Lodgings, shops, and warehouses lined the main street along the harbor. The main honjin of the town, then run by the Tagaya family,[1] and today maintained as a small art museum (the Sannose go-honjin geijutsu bunkakan), was one such building. An adjacent building, today known as the Matsumoto ke jûtaku (Matsumoto family home), dates back some 250 years and is believed to have been originally used as the home of Hiroshima han officials who oversaw the town's chaya.[2]

Korean missions, arriving in Kamagari by boat, disembarked at these stone steps, and then processed down red carpets laid down all along this main street (running parallel to the stone steps), and along roads leading away from the water, past the honjin and then to their lodgings. The top-ranking Korean officials stayed at the Upper Teahouse (ue no chaya), located behind the honjin, while middle-ranking officials stayed at the Lower Teahouse (shimo no chaya), on the opposite side of a narrow road leading in, away from the water. While these two chaya are no longer extant, the honjin is maintained as an art museum, and these roads, along with the stone steps, and several other historical buildings, are still extant, and the path walked by Korean or other elite visitors to the town can thus still be seen. This road, extending path the honjin, between the two chaya, leads to a small branch shrine of Itsukushima Shrine. A side street, running roughly parallel to the shoreline, then runs from there to a Buddhist temple known as Gugan-ji (弘願寺).

A second set of elite lodgings and related buildings, located about 200 meters down the shoreline, is maintained today as the Shôtôen (松濤園) gardens, and includes museum exhibits related to the Korean missions, as well as displays of Japanese ceramics, traditional lamps and lanterns, a historical guardhouse (bansho) reconstructed based on the surviving one at Kaminoseki, and several historical homes from Kaminoseki and Miyajima relocated to Kamagari. These lodgings include a second-story room known as Kanchôrô (観潮楼, lit. "tower for watching the tides"), from which Korean envoys or other elite guests could sit and relax while watching the water of the Inland Sea, the boats, and the vista of Kami-Kamagari Island, just across the water. The port of Tomonoura, two or three days' travel by ship east, had a similar space, known as Taichôrô (対潮楼, lit. "tower facing the tides").

Since 2003, a reenactment of the Korean embassy processions has been held every year on the third Sunday in October.[3]

Kamagari is also home to the Kanrankaku (観蘭閣), a mansion constructed directly along the shoreline by Sakakidani Senjirô; a second art museum known as the Rantôkaku Museum (蘭島閣美術館); and a small museum of insects, housed in historical Edo period buildings.